Thirty seven boats took to the water last weekend for the RS Southern Championship. Sailors travelled from as far as Ballyholme, with a strong contingent from Greystones and the Royal St George YC and a big entry of Feva’s from our neighbours in the harbour, Monkstown Bay SC. The fleet included RS 400’s, 200’s and 18 Feva’s amongst the junior sailors.

Conditions started light on Saturday but PRO Peter Crowley, found wind at Cuskinny and 3 good races were had in bright sunshine and breeze of up to 11kts. Robert Espey and Michael Gunning, from Ballyholme, dominated for the 400’s with three bullets. In the 200’s Steven Graig and Conor Foley from the Royal St George, claimed 2 firsts but hot on their heels were sisters Molly and Sarah Byrne from Greystones who won the 2nd race. In the Feva class, the Royal Cork’s  Luke McGrath and Eoghan O’Regan won the first race in what was their first outing in the boat but were soon ousted by our own Jill McGinley and Meave O’Sullivan who won the 2nd race despite a split jib. Monkstown’s Luke Fehilly and Shane Dunlea won the last race of the day.

Sunday also started light but picked up to 13kts again out at Cuskinny, where Peter conducted 3 races in quick succession. Jill and Maeve, armed with a new jib, dominated the day for the Feva’s to win the event with another 3 bullets. Luke  and Eoghan remained consistent to claim 2nd place overall. In the 200’s Steven Craig and Conor Foley were back on form with 2 more wins to clinch the event, though the Byrne sisters were only 3 points away to claim 2nd prize. In the 400’s Robert Espey and Michael Gunning did enough to maintain their 1st position, with David Flannigan and Gareth Fletcher, also from Ballyholme, winning 2 of the races to finish 2nd overall. 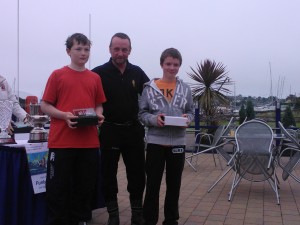 Well done to everyone involved in the organisation of the event and most especially the sailors.