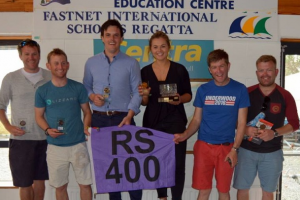 Friday- Glorious sunshine and light steady breezes ranging from 5 – 8 knots made for challenging but fair racing. The RS400’s completed all four races, two of which were sailed outside Long Island in dying breeze and two of which brought sailors back inside the sound where the breeze was just about holding up.  In the RS400’s, reigning national champions Alex Barry & Richard Leonard appeared to have had a good day with a 1,1,3,4 only to have been OCS in race 1 which meant Bob Espey and Tiffany Brien took the overnight lead with a 5,3,1,3. The weekend was to continue to be a battle between the two teams with it going right to the wire on Sunday. There were four different race winners on the day with class stalwarts Emmet & James Ryan taking race one and laser supremo Chris Penney and Simon Martin taking race four. Katie Tingle and Fionn Lyden deserve a mention for leading to the first windward mark in race four in what was their first outing ever in an RS400 and likewise, a strong performance on the day for Laser Radial sailor Johnny Durcan and crew Grattan Roberts who sat in 5th overnight.

The RS200’s managed three races on Friday, Neil Spain and crew Shane Hughes had no intentions of being bridesmaids again and lead the unstoppable Marty O’Leary and Rachel Williamson by one point overnight. It seemed this was a sign of the weekend to come with the two boats continuing to blaze a trail on the rest of the fleet for the weekend. Jocelyn Hill and Katie Kane from Antirm had a great day and lay in 3rd place overnight.

Super Saturday:  An earlier start of 11am on Saturday allowed for four races to be completed by both fleets. Winds had increased considerably from Friday and sailors enjoyed the perfect RS conditions with a South Easterly wind blowing 15 – 20 knots all day. The new breeze meant for a change in faces at the top of the RS400 fleet. Class President Dave Cheyne and Stevie Kane having sat 13th overnight came out blazing with a 1,2 in the first two races and scored an impressive 15 points on the day having scored 50 the previous day. Likewise David Rose and Ian Hef had a very strong day with a 3,7,2,2 to score 14 points having scored 49 the previous day. At the top of the fleet things weren’t looking good for the leaders with Bob & Tiff scoring a DNF in race one having to return to shore with slot gasket issues and Alex & Richie broke a rudder before the race but just made the start having secured a replacement. Bob & Tiff were back out of the blocks and recovered to score a 1,4,4 with Alex & Richie under pressure after a 4,5 managing to close the day with a 1,1. This left Alex & Richie in the lead by a mere 2 points going into the last day. The day took its toll with sailors bruised and battered but still smiling and three boats on their side over night as their owners prayed that the replacement  slot gaskets would dry overnight.

In the RS200’s Neil and Shane took the spoils scoring an impressive four 1st places and showing they meant business. Marty & Rachel had a DNF in the first race but came back out to take three 2nd places. Past President Frank O’Rourke with local sailors Noah McCarthy were back on form with four 3rd places on the day but consistency on day one was rewarding Royal St. George pair Toby Fowler and Greg Arrowsmith who sat in 3rd place overnight. Special mention must go to the three boats from Cullaun Sailing Club who persevered on the day and particularly Aoife Cleary Ward and Niamh Edwards who were still smiling coming up the slip.

Sunday The RS400’s had two final races on Sunday with all three medal positions up for grabs. Sailors were greeted outside by a giant Atlantic swell and very light and shifty conditions as the sea-breeze fought the thermal North Westerly. With Alex and Richie scoring a 2nd over Bob and Tiff’s 3rd in race one Paddy Power had the odds in the Cork boys favour. All they needed was for Bob and Tiff not to win the race or for them to score a fourth but having hunted each other down in two general recalled starts, the Northern team slipped away on the first beat and found the best breeze to lead by ‘miles’ at the top mark, a lead they carried safely all the way to the finish. Alex & Richie were left at the back of the fleet having fallen foul to the conditions and could only watch on as Bob Espey and Tiffany Brien crossed the line to secure the 2016 National Championships by one point, this being Bob’s second time securing the trophy and first time winning the event outright. Alex and Richie did enough for second place and Emmet and James Ryan did enough to fight off the pressure from young guns Johnn Durcan and Grattan Roberts to take third place and the bronze ISA medal.

The RS200’s needed three races to complete the card and with it all but sewn up, Neil and Shane had a scare in race 1 scoring a 3rd while Marty & Rach took the bullet. This wasn’t enough to phase the experienced pair who went on the win race two giving them the 2016 National Title and the freedom to head home early and miss the last race. A convincing win for the boys left them with 9 points and Marty & Rachel went on to win the final race giving them the silver medal on 13 points. Toby Folwer and Greg’s consistency continued as they scored a 2,5,2 on the day securing them the Bronze medal.

Social: Brosnan’s Centra in Schull kindly layed on a BBQ immediately after sailing each day which was  very well received by sailors. Despite the tiring conditions of Super Saturday and impromptu party kicked off in the upstairs of Newman’s bar with massive craic had, a South v North sign off, apt for the year that’s in it, adding to the banter. Special mention for John Downey and Stevie Kane who’s countries can be very proud of their performances on the night.

All in all an excellent weekend was had by all, only made possible by David Harte and his massive team in the Fastnet Marine Outdoor Education Centre in Schull including RS400 OOD Alan Crosbie, the generous support from Centra, the people of Schull for providing camping facilities, good food and tasty pints. 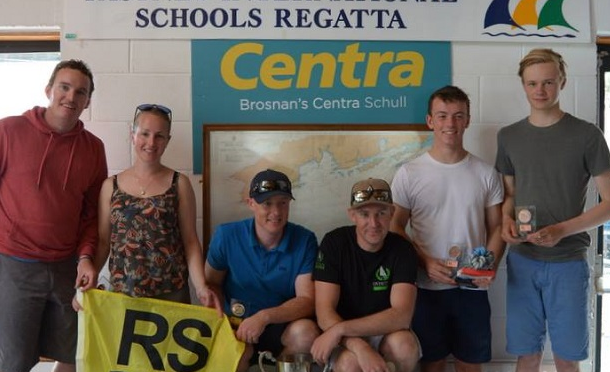 The next event for the classes is the end of seasons in Blessington on the 24th & 25th September.