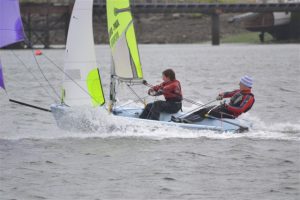 However, Harry and Peter soon got the measure of the conditions and put pressure on David leaving it all to sail for on Sunday. Light winds, sunshine and a strong ebb tide provided a different challenge for the competitors on the Sunday.

Harry and Peter showed their sailing experience by winning all three races in these testing but summer like conditions, while David came in second with Jil McGinley and Meave O’Sullivan finishing third overall.

On another note, Patrick Crosbie and Grattan Roberts continue their build up to the ISAF Youth Worlds in Dun Laoghaire next month with a very accomplished 28th overall in the 420 class event at Kiel Week last week. This was in a top class fleet of 150 boats and having won the last race on the event to confirm their very good standing at present.