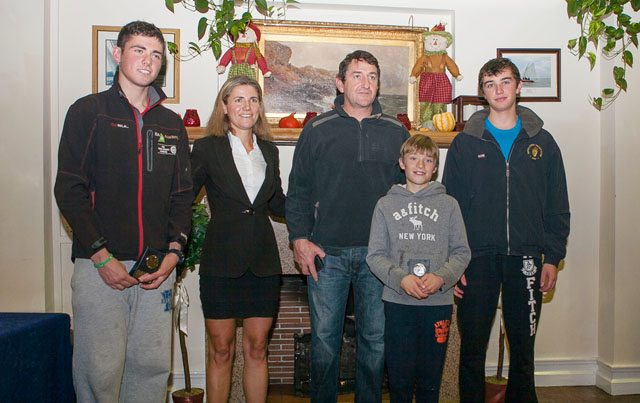 SB20 competitor, Ben Duncan has taken the overall title at the  ISA All Ireland Sailing Championship. The event which was to take place over two days had to be whittled down to one due to  forecast weather which makes one wonder why it was not postponed in that case. Seven races were run on the day.  However, the major news of the event was the success of Junior Champion Séafra Guilfoyle from the Royal Cork Yacht who took second overall in the event that was being sailed in J80s a huge jump up for Séafra from Optimist to Laser Radial to J80 in such a short period of time. 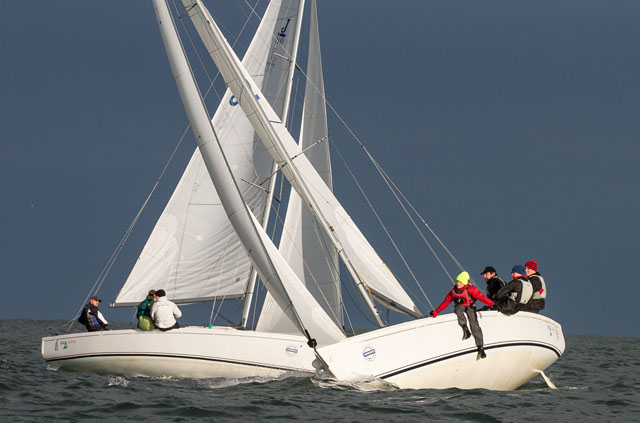 Séafra Guilfoyle and crew on port tack during racing at the ISA Championships. Picture Aidan Tarbett.

The ISA reports: “The day began with the 16 class representatives and their crews being split into two eight boat fleets. Due to the forecast weather conditions for Sunday, the decision was made to sail two races in each fleet in the morning with the top four teams from each progressing to the final series that would take place in the afternoon. Sailing in the Irish Sailing Association’s J80 keelboats, the first eight teams took to the water for a 10.30am start in a 15 knot south-westerly. Leading the fleet in the first race was SB20 champion Ben Duncan who took the bullet followed by Ian Matthews from the National Yacht Club in Dun Laoghaire and John McGuinness from Moville in Donegal. It was local Howth Yacht Club sailor Cillian Dickson who took the win in the second race followed by Ben Duncan with Ian Matthews in third. On a total of 3 points, Ben Duncan and crew Joe Turner and Davie Taylor were the overall winners of the first fleet earning their place in the afternoon’s Final Series. Also progressing to the Final were Ian Matthews (5 points), Cillian Dickson (6 points) and John McGuinness (8 points).

Facilitated by an on-the-water changeover, the second eight teams began racing almost immediately as strong winds were forecast for the early afternoon. Fireball sailor Noel Butler took the first win followed by a third in the second race, securing his place in the final. Also moving forward was Colin Byrne from Dun Laoghaire with two second place finishes and tied on 4 points with Noel Butler. Finishing third overall in the fleet on 5 points was teenager Séafra Guilfoyle who was invited to the championships upon winning the Junior event last month in Cork. And the sailor taking the last place in the Final Series was Trevor Kirkpatrick from Carrickfergus with a total of 8 points. 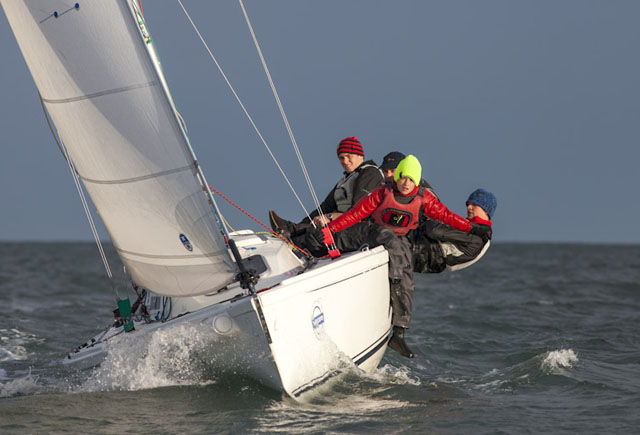 All sailors returned to the shore after the fleet racing had finished as the wind had picked up to almost 30 knots. After a two hour break the boat draw, racing resumed at 3.55pm. Three final races were successfully completed in 8 knots but after the second race Ben Duncan had the championship in the bag. He went on to win two of the three races and placed second in the other winning the event on a total of 5 points with a fourpoint lead. In second place was young Séafra Guilfoyle who won the last race of the regatta and finished on a total of 9 points. Séafra also had the youngest crew member of the event on his team, Dylan O’Grady, HYC who is an Optimist sailor and only 11 years old. Third place went to Ian Matthews who finished on 12 points.