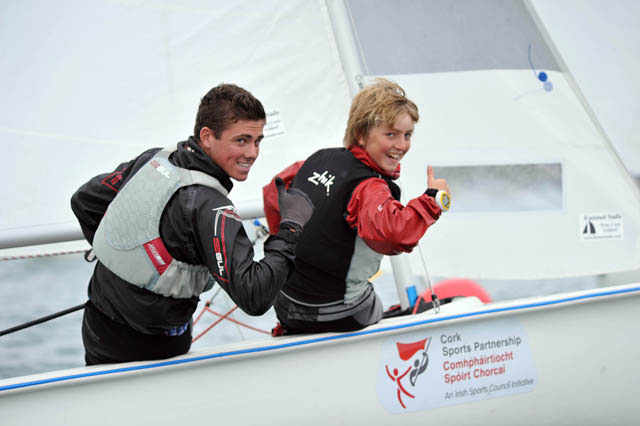 Thumbs up from Séafa Guilfoyle and Richard McGinley as they take the winning gun. Picture Provision

Séafra Guilfolyle from Royal Cork Yacht Club has today been crowned the 2013 ISA Junior All Ireland Sailing Championship after a nail bitingly close nine race regatta. Going in to the medal race Séafra was tied on points at the top of the leader board with fellow ISA Academy sailor Finn Lynch, who only two weeks ago won the U21 Laser Radial World Championships. But a fourth for Séafra in the medal race was enough to put him two points clear of Finn to claim the prestigious title.

The championship got under way at the Fastnet Marine OEC in Schull, Co. Cork yesterday (Saturday) where the initial five scheduled races were successfully sailed and concluded today with three further fleets races followed by a double points medal race for the top 10 boats. The invitational regatta, which began in the 1940’s, saw 23 of Ireland’s top young sailors take to the water in TR3.6 dinghies.

Racing began this morning in light to moderate winds in Schull Harbour. Finn Lynch and his crew Florence Lyden had been the overnight leaders but dropped back to third after the first race while Darragh O’Sullivan, also from the ISA Academy, and his teammate Anna O’Regan took the lead with Séafra and Richard McGinley Both RCYC in the silver medal position. Only three points separated the three sailors and with two more fleet races and a double points medal race yet to be sailed, every move and tactical decision would be critical.

Proving just how tight the competition was, it was Séafra who took pole position with a bullet in Race 7 knocking Darragh back to third place while Finn moved up to take second overall. And the battle continued during Race 8 when a win for Finn meant both he and Séafra were tied on 21 points with only the medal race left as the decider.

Both Séafra and Finn got off to a tricky start in the medal race. They, along with Darragh, were towards the back putting them in the difficult position of having to climb up the fleet. But with a wealth of skills and international experience the talented sailors worked the conditions improving their positions. At the end, Séafra couldn’t quite reach the top three but a fourth place finish was enough to beat Finn’s fifth giving him the Gold with a two point lead. In Second place was Finn Lynch NYC with crew Florence Lyden SSC followed in third place by Johnny Durcan and crew Patrick Crosbie RCYC

Séafra will now receive an invitation to compete at the ISA Senior All Ireland Championship from the 25th to the 27th of October in Howth Yacht Club.

Commenting on his win Séafra enthused “The medal race was really nerve-wracking especially having Finn so close to me the whole time but I’m really happy with how I sailed. I’m delighted with the outcome and I’m looking forward to getting to compete at the Senior All Irelands next month in Howth”.