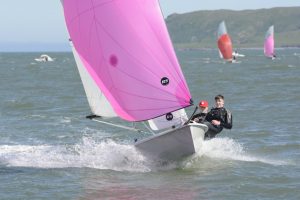 The recent RS200/400 Eastern Championships hosted at Rush SC was sailed in near summer conditions. A great credit to PRO Richard Kissane and Race Committee who ran the races like clockwork both days setting perfect courses with his mark-team to keep to the schedule and get in 6 races over the weekend.

On day one for the 200s, in ideal conditions (15-18knots ) for Royal Cork’s Cian Jones & Luke McGrath they took full advantage of the building breeze and turned in 3 bullets. Aaron Jones & Katie Kane not far away with 3 2nds and Ben Ferris & Peter Darragh completing the over night top 3. In the Fevas Lily Thorup & Sibeal Nic Giolla Coda dominated with 3 firsts – followed by Matthew McClernon & Erin McClernon with an equally consistent 3 2nd places and Alannah McGuire & Rachel Keane completing the over night top 3.

The 200s had closer racing on day two as few more boats get in the mix including another Ruigrok Erica Ruigrok & Lauren O’Hare to mix in the top 3 – standing head and shoulders above… her crew with very well practised capsize technique. But in the end Cian Jones & Luke McGrath added 3 more wins to make a perfect scorecard and win Boat of the weekend followed by Aaron Jones & Katie Kane in 2nd & Ben Ferris & Peter Darragh 3rd.

On day one, the 400’s were well powered up in the 15-18knots with locals Alan Ruigrok & Max McKnight storming away to show the fleet they were up for it! Gareth Flannigan & David Fletcher pulled in a 2nd Neil Spain & Ross McDonald (moving up from school in the 200s)  coming in 3rd.

In the second race Ruigrok/Max McKnight lead again but Spain/McDonald got them downwind to take win with Barry McCartin & Andrew Penney 3rd. The final race of day 1 saw Ruigrok/McKnight blitz away again to take the bullet, Flannigan/Fletcher were 2nd & Spain/McDonald taking 3rd. Racing among the 400’s was so tight with many photo finishes required throughout the 3 races and the big waves taking a few victims as they fell over downwind.

Day 2 lead to a slight postponement as some fog came in before fleet were sent out in a building 11-14 knot breeze. More tacking practice out the harbour and soon enough a course was laid and races began. In the first race the racing was super close with only 1min separating the top 10. Flannigan/Fletcher won race 4 squeezing Ruigrok/McKnight into 2nd, Spain/McDonald 3rd. The 2nd race saw the wind picking up slightly again giving more surfing conditions. This time Ruigrok/McKnight won after a very tight battle with Mclaughlin/McKinley with McCartin/Penney in 3rd. This secured the event for Ruigrok/McKnight but places behind were all to play for especially given retirement due to unfortunate toe-strap break on Flannigan/Fletcher’s boat sending them home early.

This time Paul Mclaughlin & Owen McKinley sailed a great race only for Alan Ruigrok & Max McKnight (sailing on anyway) to come from way back as the wind got light and patchy to steal it at the death. Neil Spain & Ross McDonald came in 3rd. This made the final results as follows: