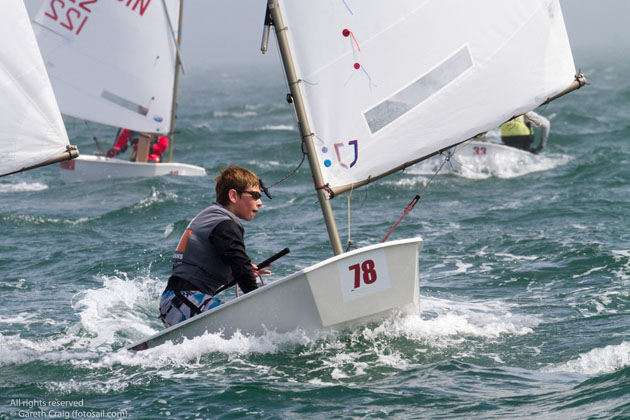 After three days of glorious sunshine at the Optimist European Sailing Championships when Dublin Bay rivalled the Costa Smeralda, yesterday’s fog was succeeded by what in Ireland is called a soft day – drizzle and mist – but at least there was reasonable wind.

The new conditions clearly did not suit many of the sailors on the overnight leader board with the notable exception in the girls’ Gold fleet of Ebru Bolat, sailing for the Royal Romanian Yacht Club. She had a superb race. In the top pack from the start, on the shifty final beat she and Pia Dahl Andersen (Norway) broke free on the right hand side and Ebru finished 2nd. She is now sure of a medal with a 26 point lead and her only rival for Gold, Spain’s Iset Segura, must come in the top two tomorrow to win the event. Martina Müller from Lake Zürich remains in Bronze position but the group behind her is very close and includes Alexandra Stalder (Italy), renowned for having won the 850+ boat Garda Meeting in 2013, currently in fourth place.

In the boys’ Gold fleet leader Enzo Balanger from Guadeloupe sailing for France sailed his discard in 20th. He is still ten points clear of his main rival Kasper Nordenram (Sweden) but the main beneficiary of the new conditions were Daniel Toh of Singapore who won the race and German Lennart Kuss from the famous Baltic sailing venue of Warnemund who came 4th.

The new conditions did seem to suit the Irish better than their rivals. In the boys’ Gold fleet James McCann, lying 14th overnight, rose to 10th equalling his best ranking so far. In the girls’ Gold Clare Gorman who was back in 32nd place this morning sailed an excellent race. On the final leg in shifting winds she sailed a very conservative last beat to finish 14th and raise her overall ranking to 23rd. Gemma McDowell of Malahide and Alix Buckley of Skerries retained their placings in this illustrious company.

As for tomorrow the sun is trying to break through but this is Ireland and weather-wise almost anything is possible.

With a forecast for the weather to deteriorate tomorrow, which hitherto has been glorious, it was decided to change the original schedule and run two races today (17 July) at the Optimist European Sailing Championships on Dublin Bay. In fact the day became a race against time as mist thickened into fog and several races had to be shortened for safety reasons.

Two races, numbered seven and eight, were successfully sailed for the Gold fleet but Race 8 for both the Silver and Bronze fleets had to be postponed until tomorrow.

In the boys’ Gold fleet four of the leading sailors had poor results which they will use as discards. Kasper Nordenram (Sweden) with places 6 and 15 slightly reduced the lead held by French sailor Enzo Balanger who nevertheless has a healthy 14 point margin. The main beneficiary was reigning champion Tytus Butowski from Poland who has now moved into bronze medal position.

Royal Cork Sailor sailor James McCann had a mixed day, discarding his second result of the day, and is now in 14th place.

Dublin Bay was at its very best again today (16 July) for the Optimist European Championships. Bright sunshine, puffy clouds and 14-16 knots of wind greeted the 254 sailors.

Two further races were sailed to give six so far. At this point the sailors are split into fleets of fifty: Gold, Silver and Bronze for the boys and Gold and Silver for the girls. At this point too, the worst race result is discarded which means points reflect the best of five.

The big Irish success is that James McCann from Royal Cork Yacht Club bounced back magnificently after yesterday’s disappointment. With 11th and 5th in today’s races, together with discarding his 28th place, he sits on a total of 41 points and placed 13th.

James was the only Irish boy to qualify for the Gold fleet but four of his teammates qualified for the Silver: Jamie McMahon, Loghlen Rickard and Peter Fagan all from Dublin as well as Harry Bell from Co. Down.

In the overall standings French sailor Enzo Balanger from Guadeloupe tops the leader board with results of 1, 1, 3, 3, 1 totalling 9 points. Fourteen points behind at this early stage is Pablo Lujan of C.N. Javea, Spain while Swedish lake sailor Kasper Nordenram of Rörviks Sailing Club lies third.

After another first place today Iset Segura from the Catalan club of Arenys de Mar remains at the head of the fleet followed by Ebru Bolat of Romania and Brazilian Olivia Belda.