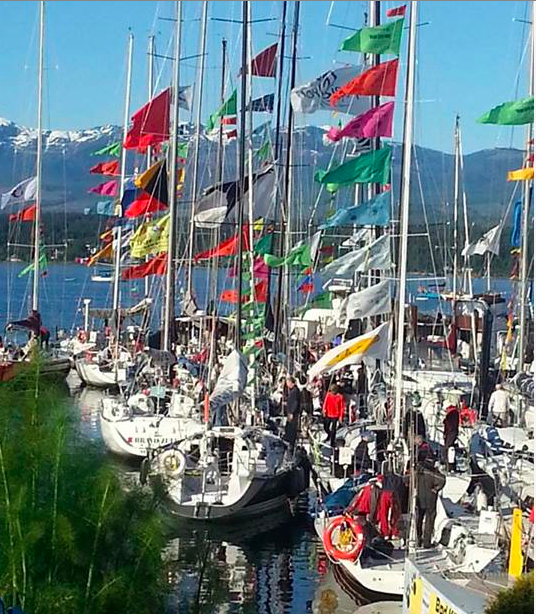 The Van Isle 360 is a biennial, 580 nautical mile point-to-point race circumnavigating wild and rugged Vancouver Island, British Columbia, Canada. Sailed in ten legs, the course provides inshore, offshore and overnight sailing through some of the most stunning and challenging waters on the planet.
The race was designed with spectators and sponsors in mind. With the exception of Hardwicke Island, all stops are accessible by road, allowing easy access for support vehicles and followers. The number of people following by road has increased substantially each year, adding to the overall festival atmosphere at each stop.

Here George explains the race: “42 yachts take part in this bi annual race mostly from Vancouver and Seattle! They use a high scoring points system and bonus points awarded for podium finishes along with difficulty ratings eg today the last and final leg of this race is No. 10 and there are 17 of us in the Division 2 fleet so if we come first 170 points are up for grabs!

It’s a full two week long race! The first week was spent heading north inside Vancouver Island stopping every night staying in cabins and hotels along the way! The starts are usually at 8:00am so ridiculous early mornings and due to an exceptionally light wind year for the race, we arrive to a new port late every evening. The inside of the race ranged from 24 miles to 70 miles a day! Once you hit the new port it’s time to start planning food for the next day as you’re up at 5 am each morning for the start as well as trying to fit in a fun evening!

The scenery and wildlife has been absolutely amazing. Sailing in between islands and mountains that are 5,000 ft tall! Some of the crews even saw bears on the beach along the race.

We were battling tides of up to 7 knots at stages. One day we raced to a salmon fish farm literally in the middle of nowhere and rafted up where they threw a BBQ for the competitors.

The outside of the race we had a 70 mile race that took 22hours and arrived in a very small place called Winter Harbour where 10 people occupy the place all year round.  The only way in and out is down a bumpy old logging road! So we sailed for 8 days straight till our well deserved day off  after arriving in at 5 in the morning!

Then  followed a 150 mile leg that consisted of very light breeze taking us 36 hours and one of the best sails I have ever had, a downwind 90 mile race from Ucluclet down to Victoria. Four hours into the race we made very little progress due to light airs and the wind started building and soon we peeled to the A4 and had 27 knots of breeze seeing an average of 13 knots of boat speed for the remaining 2 hours.
I kept on thinking what a man my younger brother is having his kite up in 38 knots of breeze all by himself not to mind a fully crewed j109 in the dark with 10 knots less.

Today is the last leg, a 60 mile race through many islands and loads of different ways to get to the finish  and along with tidal gates it is proving to be a very tactical mind blowing leg.

I definitely will do this race again in a few years and hope to bring a good crew over from Ireland”.

Thanks to George for the description of the race at which one could almost feel present and we hope the result will be all he is hoping for tomorrow.