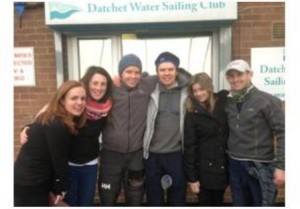 The event ran like clockwork completing over 110 races over the two days, Imperial College, Portsmouth and Sevenoaks all pushed hard in the round robin series. A perfect 10kt breeze meant that team tactics took precedence over boat handling.

Team Zephyr, representing University College Cork & the Royal Cork Yacht Club, recorded an unprecendented white-wash victory, with 18 wins from 18 races and took the Brunel Badger Trophy in style. The newly formed team was using this event as a warm up fro the upcoming UK Team Racing Nationals, George Invitational and the Wilson Trophy later this Spring. They were delighted with the result and are looking forward to a great season in 2013.