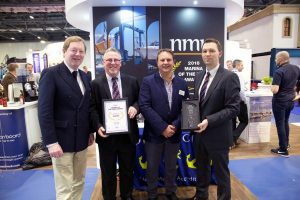 The Yacht Harbour Association (TYHA) have announced the winners of their prestigious NMU Marina of the Year Awards at the London Boat Show. Now in their fifth year, the Awards, sponsored in 2018 by specialist insurer NMU, are voted for by berth holders. They recognise the best of over 160 Gold Anchor accredited marinas from across the globe and the NMU International Marina of the Year  2018 is the Royal Cork Yacht Club in Crosshaven, Co. Cork.

Speaking at the Awards, Gavin Deane, General Manager at the RCYC said, ‘we are delighted to receive such a significant award from TYHA. Having been runners up in the category last year it spurred us on to improve our standards even further over the last 12 months.”

Simon Haigh, Chairman of The Yacht Harbour Association gave his praise to all of the winning marinas involved. “Many congratulations to all the winners and runners up in the NMU Marina of the Year Awards 2018. These awards have built huge momentum since they were introduced and really mean something because it is marina customers who are voting for their marina, recognising the excellence of facilities provided, and the lever of service which they receive.”

The General Manager of The Yacht Harbour Association, Jon White, summed up the awards for 2018. “Yet again, the competition for these much coveted awards was fierce. The winners, runners up, and all the marinas voted for in this year’s NMU Marina of the Year Competition, deserve a huge round of applause. Right around the world we are seeing marinas rise to the challenge of meeting the modern berth holder’s needs, ensuring they receive both excellent facilities and services.”

Gavin Deane continued, “in July of this year, the Royal Cork will host Volvo Cork Week from July 16th to 21st and we will welcome visiting yachts from all over the world and also, as gateway to the Cool Route we are particularly pleased with this recognition from the end users of our facilities.”

All the information on the NMU Marina of the Year Awards 2018 is available here: www.marinaoftheyearawards.com