By Bob Bateman on September 11, 2013 in Latest, Uncategorized

At the NYYC after three more races were sailed yesterday, Royal Cork are lying second with very consistent performances.  It was fascinating watching the tracker but unfortunately there were four boats with their trackers not working but nevertheless it was edge of the seat stuff all the way.

The second day of racing at the New York Yacht Club Invitational Cup presented by Rolex  had got off to a slow start when the wind took longer than expected to arrive on the course the Race Committee had chosen north of the Pell Bridge in the East Passage of Narragansett Bay. Once the southwesterly breeze filled in, three races were run in upwards of 10 knots, with gusts to 15, giving the 20 international yacht club teams an excellent workout.

“What I’ve seen on the race course up to now is that all of these teams have much improved,” said Brad Read, Executive Director of Sail Newport and the 2002 J/24 World Champion who is providing race commentary along with NYYC’s Sailing Director and America’s Cup umpire Brad Dellenbaugh. “The teams that have been here for three renditions now are consistently quicker than they were the first year and their boat handling is so much better.

Larchmont Yacht Club sailed all three races carrying the Rolex gold spinnaker that identifies them as the standings leader. After finishes of 2-16-3 today, they maintain that lead spot with 25 points. Following in second with 31.3 points is Ireland’s Royal Cork Yacht Club after finishing 7-6-5 today. The defending champions, Royal Canadian Yacht Club, moved up to third overall after their ninth-place finish in today’s first race was followed by wins in the subsequent two races. With 32 points, they are barely out of second and certainly within striking distance of the top spot. 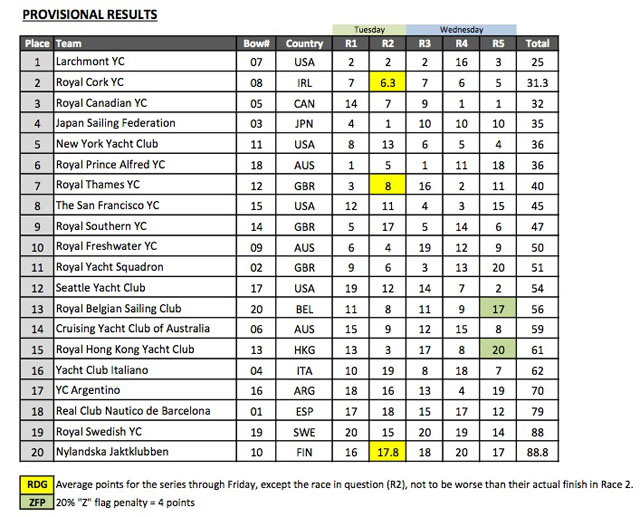