By pressoffice on May 30, 2013 in Latest, Uncategorized 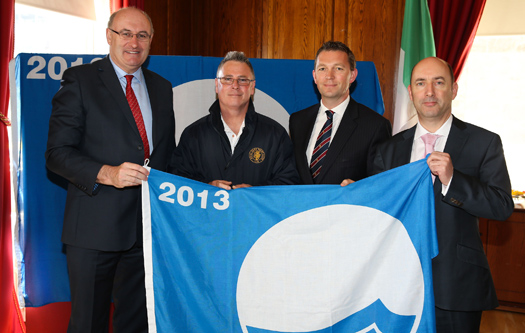 In yet another first for the Royal Cork, it is the first yacht club in Ireland to be awarded a Blue Flag. The Royal Cork Yacht Club is the only new marina in Ireland that has attained Blue Flag status in 2013 and is one of only three new Blue Flags awarded this year along, with Killiney and Seapoint, in Co. Dublin.

Steeped in history, the Royal Cork Yacht Club in Crosshaven, Co. Cork, prides itself on being the oldest Yacht Club in the world and the award of Blue Flag status comes after last year’s award of 5 Gold Anchor Marina status as well as an ICOMIA Clean Marina Award – an internationally recognised sure sign of a quality marina. ICOMIA is the International Council of Marine Industry Associations and represents the recreational boating industry worldwide.

There are now four Blue Flag Marinas in the country, the other three have had the award for the last few years and they are Kilmore Quay in Wexford, The Tree Sisters Marina in New Ross and Killinure Point Marina in Westmeath.

The Royal Cork Yacht Club was the only new marina in Ireland that has attained Blue Flag status in 2013 and there was huge emphasis during the presentations on how difficult it is for a marina to attain Blue Flag status.

Gavin Deane, General Manager, Royal Cork Yacht Club said: “This is another terrific achievement for the Club. Mark Ring, the Marina & Racing Coordinator at the Royal Cork led the project and put months of work into achieving Blue Flag status so it’s great to see that work paying off. We can now call ourselves the oldest and cleanest yacht club in the world!”

The awards comes as planning begins for Cork Week 2014 Ireland’s most prestigious yachting regatta, which takes place at the club in Crosshaven in July next year.