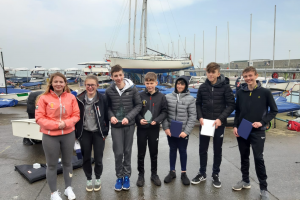 By Brian Jones on March 4, 2019 in Junior Sailing, Topper

The first topper event of the year, the annual Winter regatta took place on Feb 23th-24th at the National Yacht Club in Dun Laoghaire.

Fifty boats launched in spring-like conditions, for 3 races on day 1 with light winds and mild temperatures. RCYC sailors dominated from the off, and after the second race it was clear that all were sailing well and positioning themselves to be in contention for the event.

Eoin Horgan getting 3rd in race 1, with Cillian Foster getting the bullet in race 2 followed closely over the line by Darragh Collins, and all seven RCYC sailors in the top 10. RCYC sailors took the first 5 places in race 3 with Eoin Horgan winning and a mighty battle for second and third with Emma O’Sullivan narrowly ahead of Neil O’Leary.

Day 2 proved to be much windier with Hugh Lynch featuring strongly with a great win. As the winds blew up, the remaining races were cancelled and some junior sailors were towed back to shore. Thanks to Rob Foster for having his RIB on the water which was a great support for our sailors. Big thanks too to all @NYC for a great event.