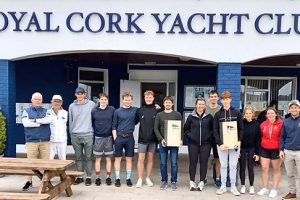 By Communications on September 10, 2021 in Latest

Saturday 4th August in Crosshaven saw the annual staging of the 77-year-old Book Challenge, which goes back to 1944 when the dinghy sailors of Cork Harbour SC (succeeded in time by the Royal Munster YC and then the Royal Cork) took on their counterparts in Sutton Dinghy Club for team racing in International 12s, the trophy being a hefty vellum book in which the winners are obliged to inscribe the outcome of the most recent staging. 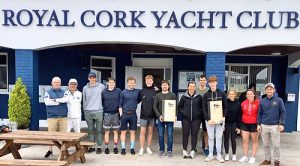 Since 1980 the programme has been doubled up with a Junior Section, so with 2021’s sailing accelerating into post-pandemic mode, the logistics were formidable in getting the Sutton teams together and down to Crosshaven, where it was the RCYC’s turn to host it with the national flotilla of Firefly dinghies. We let Sutton Dinghy Club Team Manager and former Commodore Andy Johnston take up the tale:

The teams were meant to travel to Cork in April 2020 as part of the Cork Club’s Tricentenary Celebration, but Covid meant the event was cancelled. However, between Andy Johnston in Sutton and Alex Barry in Royal Cork, the commitment was maintained, and a date of September 4th 2021 became available in Cork. Andy – with the help of Kirk Durnford – set about making sure SDC could take a Junior Team along with the Seniors. Despite their lack of experience in team racing, it was felt that the Juniors on the trip would greatly benefit from both racing and watching the Senior teams.

The Sutton squad began arriving in Cork on Friday evening, and were welcomed by RCYC Admiral Colin Morehead and RCYC Archivist Paul McCarthy, with the Senior Book being brought to the Clubhouse and going on display for the weekend.

Such were the time pressures that the Sutton Senior Team selection was not finalised until the Saturday morning with Commodore Ian McCormack stepping into the last crew slot, probably one of the oldest debutants – he paired up with Team Captain Alan Blay. It was a great honour to have Robert Dickson – fresh from his Olympic endeavours – also in the team. Robert was making his Book Trophy debut, following in his grandfather Roy and sister Sinead’s footsteps.

Having sailed in Sutton Regatta the previous week, Robert is taking a little low-key time after the pressures and efforts in Tokyo. We’re not sure this was as relaxing as he might have been thinking, though…… He was partnered by Shane McLoughlin, who has just returned from his studies in Galway and has joined our building GP14 fleet in Sutton. Our final pairing saw two young GP14 helms combine with Conor Twohig, crewed by Peter Boyle.

As Team Manager, I would like to say Robert’s presence was a huge boost for our Junior Team, and it was much appreciated by all in Sutton Dinghy Club that he should make the time to join us for this historic event.

The Senior & Junior racing was best of seven in the fleet of Fireflies that are based in Royal Cork Yacht Club and was held in the river between Currabinny and the Crosshaven clubhouse.

The Junior Team of Ciaran Durnford (Captain) & Eimear Fleming, Luke Kellet & Denis McCarrick, and Oisin Kelly & Finn O’Doherty, would be first on the water at 3:30, and were afforded an opportunity to get some practice on the Fireflies on Saturday morning. The young Cork team were led by the 2021 Laser Radial National Champion Jonathan O’Shaughnessy and included two Laser 4.7 helms who had competed at the recent Laser ILCA Worlds. This would be a baptism of fire for the young Sutton team but they prepared as best they could and were committed to enjoying the experience.

Despite being well beaten by the more experienced Cork team, our young team gained vital boat handling experience and tactical insight as well as coming face to face with the subtler arts of team racing. Following the handover, the Juniors then had grandstand views of the Senior racing in the river from the hammerhead end of the marina. And boy, was the racing competitive and fiery.

From the first gun, there was no quarter given by either team, with superb boat handling from all the crews. Cork were ably lead by Book Trophy veteran and champion sailor Alex Barry with his crew Maeve O’Sullivan. The team also included Patrick and Chloe Crosbie, son and daughter of Tom Crosbie who had sailed in many Book Trophy events in his time. The third Cork boat was helmed by young Harry Pritchard, recent runner up in the Laser Radial National Championships, crewed by 29er National Champion Lola Kohl – a formidable team indeed, and on their home waters too.

The busiest man on the water if not the most stressed was the Umpire. Yours truly was in the Umpire boat as photographer, and anyone who tells you the PRO job is the most stressful is wrong – I wouldn’t be an Umpire for all the money going.

Despite one of the Sutton boats being over the line on the start, we got off to a great start taking Race 1 (10-11) literally on the last manoeuvre, with some breathtaking boat handling from both teams. With positions changing all the time, RCYC recovered composure and took Race 2 (12-9). RCYC followed this up with a similar score in Race 3 (12-9) to put pressure on the Sutton crews. It was obvious that Robert and Shane were being shadowed and followed, but this didn’t seem to faze them at all, and the Sutton crews hit back to take Race 4 (7-14) and level the match.

Race 5 really saw the Umpire stretched with incidents across the width of the course, including one which will be discussed for years. Green flag was given but many Suttonians felt it should have been a penalty against RCYC. Yet even in the long discussion afterwards there was still uncertainty about the correct call.

Sutton looked like they had recovered from that situation only to touch the finish mark, and despite a swift recovery, Cork nipped into 5th and take the win 11-10. Despite the disappointment of Race 5, Sutton with some superb pressing and communication overwhelmed Cork to take Race 6 (6-15) and set up a grandstand final race. 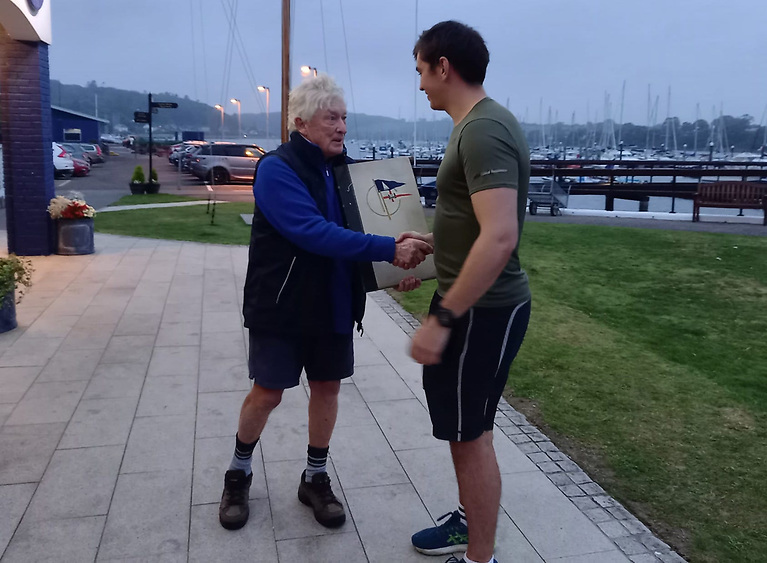 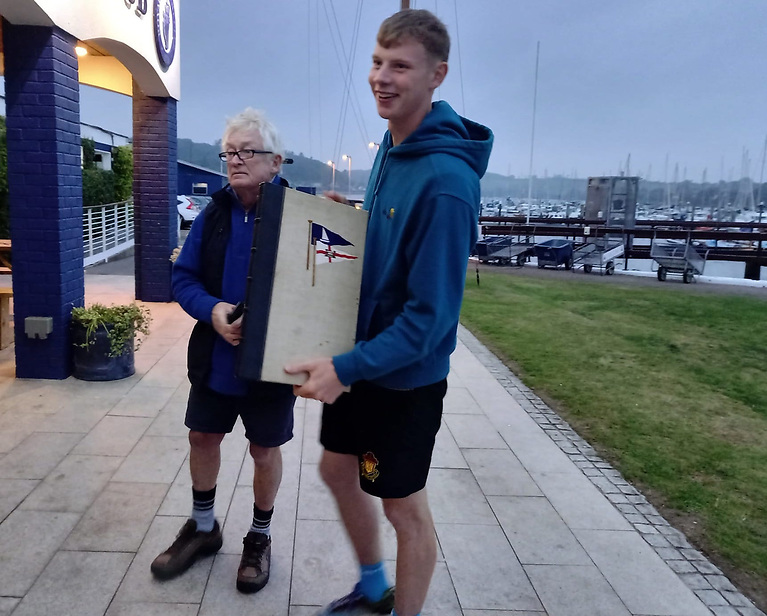 With weather drizzly, damp and getting dark, an unfortunately poor start put Sutton under immediate pressure which Cork capitalised on and secured early 1, 2 lead position. Despite an immense comeback and engagement, Sutton couldn’t put the lead Cork boat under sufficient pressure, and Cork eventually took Race 7 (12-9) to give them victory 4-3 as the Autumnal dark descended on the river.

Ian McCormack was asked to address the teams, alikadoos and Royal Cork Yacht Club members before the prizegiving. He thanked the Club for their hospitality and the opportunity to keep the event going. And in keeping with the history of the event, veteran Sutton Book sailor Dom Long of RCYC made the presentations to the respective RCYC Captains, Jonathan O’Shaughnessy of the Junior team and Patrick Crosbie of the Senior team.

In all, an excellent demonstration of boat handling, very competitive team racing and a great day all round, worthy of this historic and very special event. We look forward to the return in Sutton in 2022. 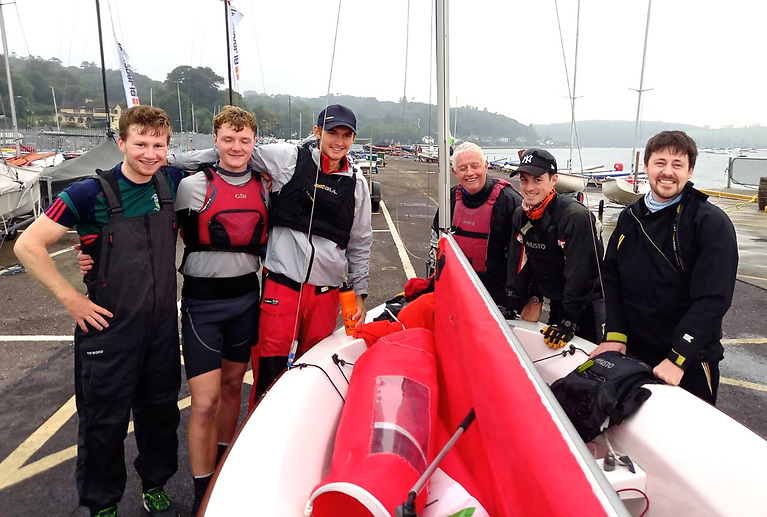