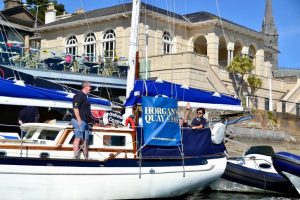 By Kieran on September 16, 2019 in Cruisers, Uncategorized, White Sail

The standard and white sail class started at 15:05 followed by the Class 1,2 and 3 fleet at 15:13. The White Sail fleet was led by the very well-travelled Encore from for the race closely followed all the way by the competitive Sean Hanley’s Luas and Plumbat with Roy Hanan and Pat Barrett.

Classes 1, 2 and 3 started soon after and the short sprint to Monkstown saw Paul and Deirdre Tingles’ Alpaca first around the corner closely followed by Ronan Downing’s Miss Whiplash and the beautiful new X45 Nadie from Kinsale YC and Frank Doyle’s Cara close behind.

The boats then quickly hoisted kites for the run down to Marino Point which made for a spectacular sight as the fleet passed up the narrow river. Miss Whiplash managed to get ahead to lead the fleet into Lough Mahon closely followed by Cara, Alpaca and Nadie. The trip up Lough Mahon allowed Nadie to power by followed closely by Nieulargo and Alpaca into the final straight by Blackrock Castle. As the boats hardened up towards the finish Miss Whiplash managed to get by the larger boats and finished just a few feet in front of Alpaca and then Nieulargo.

Class 2 saw Ronan Downing’s half tonner to take victory in both IRC and Echo with Bad company Desmond-Deasy-Ivers in second and George Radley’s Cortegada in third.

For the overall Moonduster Trophy Ronan Downing’s Half Tonner was the convincing winner taking a well-earned victory to lift the beautiful Moonduster replica trophy.

The Donegan Cup for the fastest boat from Cobh to Blackrock was also won by Downing’s successful Half Tonner with a nail biting finish where they just pipped Alpaca on the finish Line for the fastest elapsed time on 1hr 02 mins.

The Prize Giving took place in the Goldbergs bar where the huge crowd enjoyed a great barbeque with some well-earned refreshments while the All-Ireland Final played in the background.

Many thanks to the sponsors Horgan’s Quay
https://www.horgansquay.com and Union Chandlery a
https://www.unionchandlery.ie/ and also to the Port of Cork for allowing access to the marina and free overnight berthing for the visitors.Many of the fleet stayed overnight at the Port of Cork City Marina before the return trips to Crosshaven, Kinsale and East Ferry yesterday.