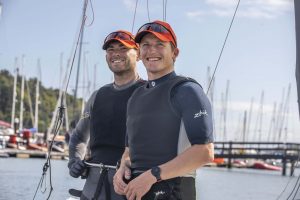 By Communications on September 12, 2021 in Latest

With everyone still on a high from Ireland (and Cork’s) success at the recent Tokyo 2021 Olympics, dreams of Paris 2024 are starting to set sail.  As the countdown officially begins, two of Cork’s top sailing athletes have announced that they joined the Irish 49er (2 person boat) 2024 Olympic campaign.

Both young members of the Royal Cork Yacht Club and UCC Sailing Club, and past pupils of Presentation Brothers College, Séafra Guilfoyle (25) and Johnny Durcan (21) have already started a rigorous training schedule with the Irish team for the Olympic qualifiers, which commence in August 2023.

Séafra Guilfoyle, who hails from Myrtleville, will be positioned at the helm, steering the 2-man boat.  The UCC economics student has recent experience competing for a berth in Tokyo 2020 with Double Olympian Ryan Seaton of Belfast Lough where they just narrowly missed out on qualification.  It’s his dream to represent Ireland at the Olympics and Seafra says he’s ‘determined to reach Paris 2024’.

His new sailing partner and crew Johnny Durcan from Crosshaven, also a UCC student in law, will be responsible for building up the speed of the boat.

Both Séafra and Johnny started sailing at the age of 7 and 8 respectively and had great success at youth level.  Séafra represented Ireland every year from the age of 12 to 18, winning multiple nationals and medalling at world championships. Since then, he has represented Ireland across the world and was a ‘Dare to Believe’ ambassador for The Olympic Federation of Ireland in 2020.  Johnny has a similar competitive background, representing Ireland on the international stage from the age of 11.  He was top ranked in optimist sailing by the age of 13, a National Laser Champion at 14, a European Junior 29er Champion at 15, and winner of the European and Irish Nationals at 16. 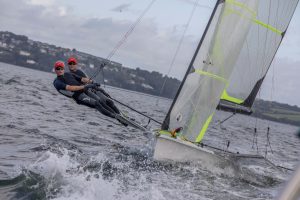 Séafra and Johnny training on home waters in Cork.

Sailing has brought the two young athletes around the world.  Although it sounds very glamourous, they say competitions often involve days of driving to get to a location as cost effectively as possible with their boat.

Séafra says that he’s proud to partner with Johnny, as he is not only a fantastic athlete but an ‘inspiration’, following his near-death experience when his boat capsized at the 29er world championship in Long Beach, California, in 2017.  It was only the quick action of his fellow competitors that saved his life.  “Johnny was as comfortable sailing as he was walking.  He was one of the firm favourites for the Laser Radial Worlds that year.  It took him a while to get back out on the water after this, but not only did he pick himself back up, he has excelled and got back to the top of his game and is now about to embark on an Olympic campaign.”

Seafra has also had a number of injuries that threatened his athletic career, including a slipped disc and a near drowning incident when his trapeze snapped. “The sport is not without risk but our experiences have made us even more determined to make our Olympic dream come true,” says Seafra.

Their rigorous training schedule demonstrates this commitment. Séafra and Johnny have been training together almost seven days a week since May 2021, primarily in Dublin with the Irish team, their coach, and trainers, and back home at the Royal Cork.

Guilfoyle Durcan Sailing, as they are now known, will compete in their first competitive race this winter when they head to Oman for the World championships.

They feel their competitive advantage in the Olympics will be their youth, their long-time friendship having come up through the sailing ranks together, their geographical proximity to each other, Johnny’s training experience with Annalise Murphy, and the fact that Seafra already has four and a half years’ experience in running an Olympic campaign behind him.

“The fact that we live so close to each other when we’re both at home, makes it easier to train outside of the official team Ireland training schedule”, says Johnny.  “We’re both young and at the height of our fitness, and Seafra brings a lot of experience and learnings from his last campaign.”

Colin Morehead, Admiral at the Royal Cork Yacht Club said, “We’re incredibly proud of these two talented and ambitious athletes, who are one of the youngest Irish senior teams to ever compete for the 49er Olympics.”

Michelle Michele Power, Manager of UCCs Quercus Talented Students’ Programme said “We are delighted to see two UCC students and Quercus Scholars campaigning together to qualify for Paris 2024.  We wish them the very best of luck and will support them in every way we can.”

Commenting on his passion for sailing, Seafra said, “Sailing has always been a huge part of my life.  Growing up I’d spend most of my time at the yacht club. out training, and doing everything I could to learn more. Thankfully, that passion is something I’ve been able to take with me from junior sailing up to Olympic campaigning. “

Johnny says, “I always got much more of a buzz from sailing then I did from other sports like soccer or tennis. I love the independence and the freedom, the water and the sea, the idea that when you are out on the water you tend to forget about anything happen in your life on shore.

“Annalise Murphy is my inspiration. I idolised her when I was training with the Irish underage team in Dun Laoghaire in my teens and got to see first-hand her incredible drive and desire.  I knew by the age of 15 that I wanted to compete for the Olympics and was hugely honoured to be Annalise’s training partner when she became a silver medal winner in Laser class for the Rio de Janeiro 2016 Olympic Games.  It was an amazing experience to help her prepare for the Olympics and only confirmed and compounded my desire to one day go to the Olympics as I really felt it was an achievable dream”.

Guilfoyle Durcan Sailing is currently sponsored by Irish Sailing, UCC, Mervue Laboratories, and CH Marine, but they are looking for further sponsors to help with support boats, travel, accommodation and logistics of getting their boat to competitions over the next three years.  For more see guilfoyledurcansailing.com or @guilfoyledurcansailing on Instagram.