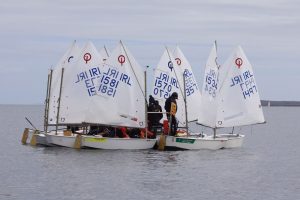 By Craig O'Neill on April 25, 2017 in Junior Sailing, Optimist
While the overall result was never in doubt, the shuffling for team places continued well after racing finished on Sunday last. At the end of 4 very challenging days of racing, in breeze ranging from 1 knot to 20, the club Optimist Fleet has once again acquitted itself very well on the National stage. 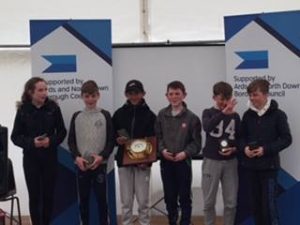 Leading the charge all week was Justin Lucas, with five race wins and no result greater than 5th counting towards his score.  His gap to second was 44 points. Harry Twomey had a tough start to his regatta, but with 3 race wins out of the last 6 races staged a remarkable comeback to finish 3rd. Harry and Justin will head to Thailand in July as part of the Irish team at the Optimist Worlds. Cillian Foster was never far from the front of the fleet either, but went very well over the weekend to finish 6th overall and secure a very well deserved place on the European team. Rory O’Sullivan was only 5 points and 1 place behind Cillian. 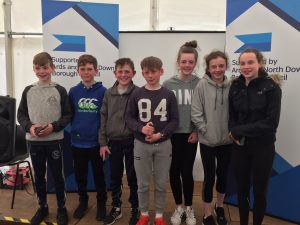 James Dwyer-Matthews heads to France as part of the International Development team, with several top 10 places and a 9th overall positioning him well in his first Trials event. Michael Crosbie was the 6th Royal Cork sailor in the top 10 – an incredible result for our fleet.

Harry Pritchard was next up in 16th and joins James on the French IDT. Killian O’Regan came in 19th, chased by Patrick Bruen (22nd) and Jamie Venner (26th), both now making their IDT debuts on the Polish team. 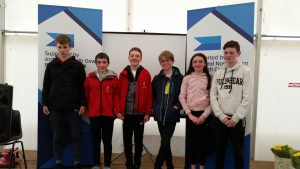 Patrick & Jamie head off as part of the Polish IDT. Credit Ian Venner

Eoin Horgan finished the series in 31st, counting 3 top 20 finishes amongst his scores. Simon Pritchard in 34th beat Kate Horgan by 1 place, with a fantastic 8th in Race 9 of the event. Simon heads off with the U12 Squad to the UK Nationals, as does Anna Keal (50th). Kate finished her regatta in a flourish, showing tremendous resilience to deliver a well-deserved 17th place in the final race.  Kate joins James and Harry on the French IDT team. 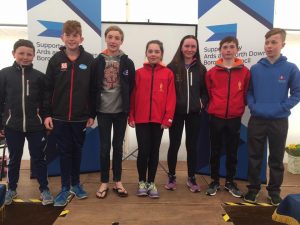 Richard McSweeney (37th), Stephen Cunnane (43rd), Eva Spillane (51st) and Anna Carroll (57th) complete the results for the Royal Cork, with Ciara Burns unfortunately falling ill during the campaign. A special mention to some of our other members, Eimer McMorrow-Moriarty, sailing under the TBSC burgee finishing 29th overall and joining Kate on the French IDT; and Archie Daly, RStGYC in 23rd.
A huge congratulations to all our sailors who took part – trials is a very challenging event and conditions made it even more so.  Each one of them will take valuable experience away, and despite the rivalries, continued and new friendships too.
Many thanks also to the parents who supported the Royal Cork fleet, and also the club coaching team at the event of Diego Blatt and John Durcan. 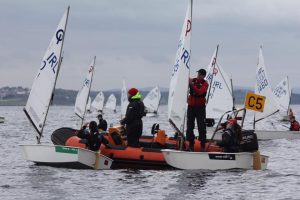 Normal service resumes on 4th May with Saturday leagues following a welcome 2 week break from the boats.