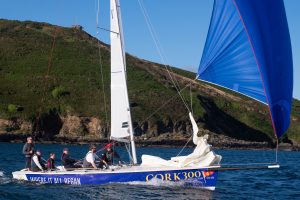 The Club had planned a phenomenal series of events across Cork Harbour this summer to celebrate our 300th anniversary. Unfortunately many of the larger high profile international events, such as The Great Gathering, the Powerboat Festival, and Volvo Cork Week, which were set to attract thousands of sailors and competitors from around the globe, had to be cancelled due to the Covid-19 pandemic.

However the Club is delighted to announce that a select number of events will now take place from August following the publication of the Government Road Map for reopening society and the easing of public health restrictions.

The celebratory and competition events include a Tricentenary Regatta, a fantastic Maritime Parade in Cork Harbour, a Royal Cork Exhibition at the Sirius Arts Centre, a Family Race to / from  Cork City, and several National Championship races.

Commenting, Admiral and Chairman of Cork300 Colin Morehead said, “We were disappointed that we had to cancel our March to July Cork300 events as a huge amount of work went into organising the celebrations for what is an incredibly historic year for our club and for sailing world-wide. However public health is of paramount importance and we are delighted that a revised schedule of our events can now go ahead next month, adhering to Government and HSE guidelines.

“We are especially pleased to be able to host several prestigious National Championship sailing competitions as part of the new Cork300 schedule. All competitors and attendees will be required to comply with public health safety guidelines and we are communicating clear information on how to participate and use our facilities in a safe and enjoyable manner on our website.

“As sailors and members of the oldest yacht club in the world, we’re thrilled to be able to get back out on the water and mark this historic anniversary for the Royal Cork Yacht Club and for sailing clubs globally. We will continue to monitor the evolving situation around Covid19.”

Cork300 events taking place for the remainder of 2020 include:

Sadly, the 1720 Europeans scheduled to take place as part of Volvo Cork Week fell victim to the covid 19 pandemic. The Royal Cork Yacht Club is delighted to announce that they will host the AIB 1720 Southern Championships 2020 as part of their Tricentenary At  Home Regatta weekend. The 1720 class originated from an idea generated by some committed racing members of the Royal Cork Yacht Club with the first prototype taking to the water in 1994. Designed by Tony Castro, they have been delighting many a competitive sailor since.

Tricentenary at Home Regatta, 28th – 30th August:
The AIB Tricentenary at Home Regatta will be the biggest sailing event of the year in the Royal Cork calendar. Racing will be available for all classes both dinghy and keelboat with many visitors expected from up and down the Irish South Coast. The National 18 Southern Championships will also feature as part of the racing over the weekend.

Maritime Parade 29th August
A maritime parade, originally scheduled for July, will now take place during the Tricentenary Regatta on the 29th August, with the support of the Irish Naval Services and Port of Cork. The Admiral of the Royal Cork and other dignitaries will review the parade from one of the Irish Naval Service vessels which will be anchored in the vicinity of Haulbowline.

1720s Race from Haulbowline to Crosshaven, 29th August
Following the Maritime Parade, a race will take place between all of the 1720s boats from the Naval Signal Tower back to the Royal Cork Yacht Club in Crosshaven.  The National 18 Class will also be participating.

Fastnet Challenge, 29th August
The Fastnet Powerboat Challenge originally scheduled for the last week of July has now been moved to the last weekend of August (Weather permitting).  This will see the UIM Long Distance Cork-Fastnet-Cork World Record attempt competed for.

Cork300 Family Race to the City, 12-13 September
In conjunction with Cove Sailing Club’s annual Cobh to Blackrock race, Yachts and craft from across Cork Harbour will take part in a race to Blackrock Castle, following on from which, they will continue to the city Quays where they will remain overnight and provide a spectacle of sail within the City environs.

Other events have been rescheduled to take place in 2021, including the Cork300 Gala Dinner and the Cork300 Wild Atlantic Way Cruise in Company along the Cork and Kerry coastline.