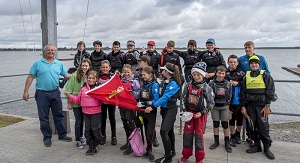 By Annamarie Fegan on July 6, 2016 in Junior Sailing, Latest

We had 22 sailors there across Senior, Junior and Regatta fleet with support being provided by the parents present.

Saturday proved challenging with, we estimate, some gusts of 30+ knots with rain and hail added for good measure. Our sailors proved up the to task with very good performances and boat handling. There were some spectacular gybes pitch poling and capsizes with eye catching speed downwind in the shallow estuary.

In the 52 strong Junior fleet early on it became apparent that the Royal Cork sailors Michael Crosbie and Justin Lucas were going head to head with the scores going into Sunday of a 1-2-1 and 2-1-2 respectively. Alejandra Peletiero (a recent addition to our fleet), Simon Pritchard, Patrick Bruen, Richard McSweeney,  Stephen Cunnane, Anna Carroll  James Dwyer Matthews, Anna Keal and Ciara Burns were all gong well especially considering the conditions as it was quite tough in places.  Eoin Horgan and Jonathan O Shaughnessy were well up the top end of the fleet and its true to say that our team were quite tired at the end of day one.

In the 37 strong Seniors we had a smaller representation with Diego Peletiero leading after day one with a very solid 5-1-2. He was closely followed by Harry Pritchard and Harry Twomey with Cillian Foster and Kate Horgan also going well.

The Regatta fleet went out but a big black cloud came down with added wind so they returned and had a sensible day on shore!

Sunday was much more clement with 5- 12 kt with occasionally sunny conditions. Juniors got away early. Justin was unfortunate with a downwind mishap which cost him a podium place, which allowed Michael to finish ahead.  Michael then wrapped it up in R5 with a win to take the title followed by Justin taking 2nd, Jonathan in 5th, Jamie in 6th (2nd Silver), Simon 9th (3rd Silver), Patrick 10th, Alejandra 11th, Richard 12th, James 13th, Eoin  14th,  Stephen 20th,  Anna Carroll 27th, Ciara 31st and Anna Keal 37th. It should be pointed out that quite a few of the Royal Cork fleet will still be junior next year so it augurs well for the club in the future.

Seniors tightened up somewhat with it becoming apparent that the title was likely to go to a ‘Harry’ but which one? They were level on points and with a win each going into race 6. The last race had Harry Pritchard well ahead of Harry Twomey at the halfway mark but with the latter finishing strongly it remained exciting until the end. It finished with Harry Pritchard winning his first title by a point from Harry Twomey.  Diego found day two tough but still finished 4th, Cillian Foster steadily improved with a 3rd in race 5 to end of 13th and Kate had a very respectable 8th in R5 to finish 23rd.

The 32 strong Regatta had a better day on the Sunday with 5 races. Emmet Lucas did really well to finish 6th, David McSweeney 15th,  Alana Twomey in 16th, with Charlie Venner and Daniel Burns in 26th and 28th respectively.

Our thanks again to Malahide Yacht Club for a lovely three days and to all the parents and the friends in Dublin who looked after them so well. 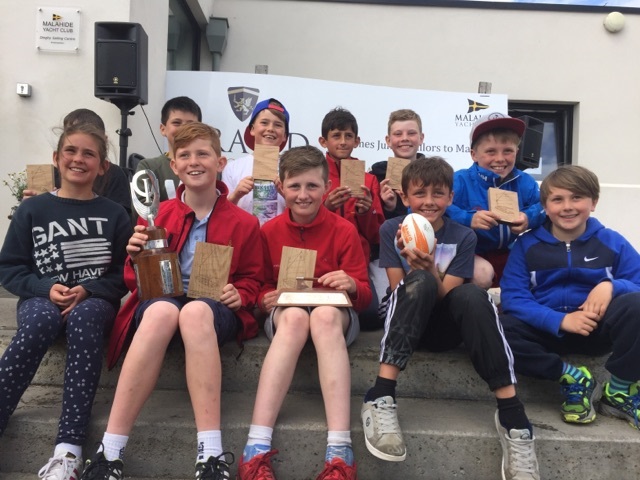