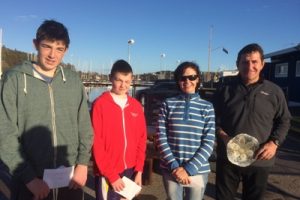 The annual Royal Cork Laser Frostbite league came to a conclusion last Sunday. David Gay was the first winner of this league back in 1975. The fleet was Full rigs only back then as there was no smaller rigs available. Many other famous names are on the silver plate now including Nick Walsh, Denis O Sullivan, Peter O Leary, Maurice (Prof!) O Connell plus many other legends of Laser sailing throughout the last 39 years. Very un-frostbite like conditions prevailed over the five Sundays of November. The first three days were perfect conditions for Laser racing, with sunshine and 12 to 14 knits of wind. A full schedule of nine races was completed. Racing was very competitive in all of the three fleets (4.7, Radial and Full rig). Unfortunately for the organisers and the sailors the last two Sundays were cancelled due to lack of wind!! Lack of wind in November, what are the chances? The Rear Admiral for Dinghies Celine McGrath was on hand throughout the month for PRO duty, results and the final prize giving. The Full rig was won by Nick Walsh. The Radial fleet was won by Tom McGrath. Luke McGrath won the 4.7 rig. Nice to see our Rear Admirals family featuring prominently in the prizes. Second overall in the Radial fleet was Cian Long with Richard Thompson a close third. Richard McGinley was second overall in the 4.7 fleet and Eoghan O Regan third. Most of the Laser fleet are travelling to Baltimore this weekend for the annual Icicle Regatta. A large national fleet is expected for this traditional pre-Christmas regatta. Best of luck to all. Paul Tingle