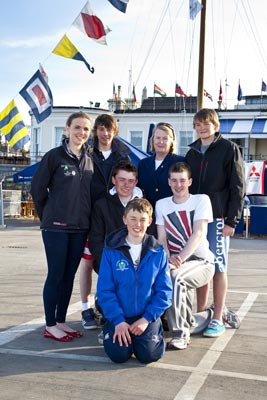 It all came down to the wire today at the ISA Mitsubishi Youth Nationals  2012 for the opportunity to represent Ireland at the Four Star Pizza ISAF Youth Sailing World Championship. There were twenty six boats in the fleet including a strong French representation and competitors from Britain, China, Canada and Portugal.  Racing started on Thursday and the Dublin duo of Robert Dickson and Sean Waddilove of Howth Yacht Club got the better of the early Irish exchanges  but by Saturday when there was wind and rough seas the Royal Cork duo were enjoying the conditions but being chased strongly by Adam Hyland and Bill Staunton of Royal St. George Yacht Club.

After Race 10 today a 13th for the Cork pair and a 3rd for the George sailors had turned the tables to put the George pair ahead and so it all came down to the final race.  However, the Royal Cork pairing held a steady nerve to finish 7th in race 11 while Adam Hyland and Bill Staunton with a 19th had their worst result of the series which they were able to discard.  When the calculations were finally done Patrick Crosbie and Grattan Roberts were the best of the Irish to finish 8th overall in the regatta and secured the nomination to represent Ireland in the World Youth Championships July 12th to 21st in Dublin.

Well done to the lads on a well deserved result and they will carry all our good wishes for the event in July.