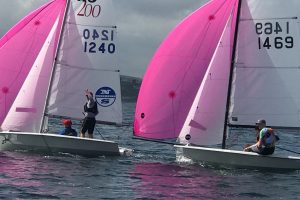 What an adventure this turned out to be, 2 RS200’s travelled up, Adam Power and Jack Young and Cian Jones and Luke McGrath.

It started with Rae Power, scouring his workplace carpark on the day before travelling looking for a van with a tow hitch and finally commandeering one from a work colleague of his. He travelled from Carlow to Crosshaven, collected the two lads and then drove all the way to Ballyholme on the Thursday, some feat and big thanks owed to him for that. There were reports of no air conditioning on board and no horse power towing up the hills but they made it.

Ballyholme is a very active Dinghy club and a very friendly one to visitors.

Many competitors from both fleets camped on the lawn for the event. Light winds were forecast for the weekend but luckily a breeze filled in each day that allowed a very competent young OD from the UK, Tom Rusbridge to run 4 races each day on the Friday and Saturday leaving the final race for the Sunday. (9 race event with one discard). 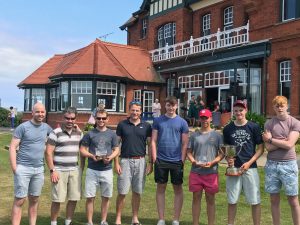 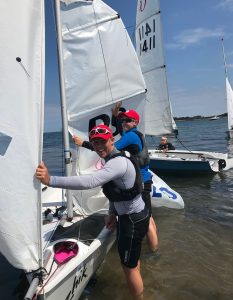 In the fleet of 18 boats, Julien Bradley from Wembley SC in the UK was very consistent with a string of race wins and safely took the overall event win however 3 boats were in contention for the 2nd 3rd and 4th spots in every race. Frank O’Rourke & crew Sarah Byrne from Greystones, Jocelyn Hill & crew Jenny Lewis from CAYC (club opposite Ballyholme) and Adam and Jack – RCYC. Day two brought drama after racing as Jocelyn initiated a protest against Cian and Luke and another Dublin boat only to be disqualified herself which resulted in Adam and Jack having a 4 point cushion in 2nd with only one race left.

When all was said and done, Adam and Jack sailed very consistently throughout the regatta, counting a 3,3,3,3,2,3,4,4 and discarding their 10th in race 1. As Julien Bradley races in the UK and is a member of the UK association, Adam and Jack were ecstatic crossing the finish line on Sunday as they secured the title of RS200 Irish National Champions.  Cian and Luke finished up in 7th position having scored well in many races.

A big thank you to Rae and Celine and James Young, the supporters club. I must mention Sheila Lyden and Jim Griffiths from Baltimore who were also up supporting with 2 Baltimore boats.

The RS400 fleet was again well represented this year in numbers and quality. With 26 boats and numerous national champions, professionals and even an Olympian in the fleet, racing was always going to be tight. Paul McMahon from Howth, crewed by Sue Monson showed great light wind pace and their recent trip to the EuroCup in Carnac clearly paid dividends. Paul and Sue lead the event from race one and were consistently being chased by Alex Barry and Richard Leonard with match racing and fleet racing tactics in play from mid-way through the event. With one race to sail on Sunday and Alex and Richie trailing by 4 points they managed to get one over on Paul and Sue on the start line and push them down the fleet to 5th while they climbed into 1st resulting in the overall event win on countback. This gave Alex and Richie the RS400 National crown and a fifth successive entry to the Champions of Champions event to be held in SB20’s in Lough Derg this year.

Robbie O’Sullivan the class president held a successful AGM on the Friday evening with important dates for 2019 to include the RS200 EuroCup to be held in Ireland and the RS400 UK Nationals which will be held in the Royal North of Ireland Yacht Club in August.

2018 isn’t over just yet and we look forward to a good crew of the RCYC RS 200’s and Feva’s travelling to Baltimore for the Southerns on the 14th /15th September (or Killaloe RS Inlands in early August for those who can’t wait). So remember to put that in your diary. 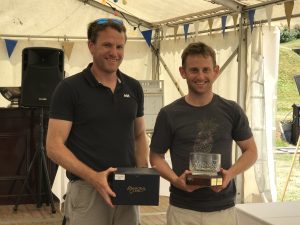 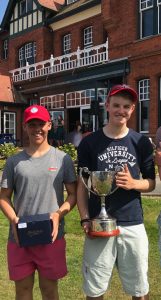