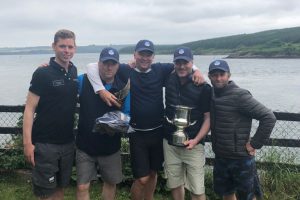 The J24 Nationals were on in Foynes over the weekend and the Club had four boat competing at the event, two senior and two junior team made the trip to Foynes Yacht Club. This was the first event for our new under 25 academy teams lead by James McCann and Cian Jone, they performed really well placing 12th and 17th out of a fleet of 22 boats. There was 6 under 25 teams at this event competing for the new Under 25 national title, considering the short time of just 2 weeks that our two teams had to prepare and get everything ready for this event, it was great to see them mixing it up with some of the other more experienced teams. I will be doing a full report on the Under 25’s weekend later in the week, once I have had a chance to fully catch up with them. But I would just like to say a big well done to them and the Club are very proud of their efforts in representing our club on the national stage. Also a big thank you to ICRA for supporting our two teams and for the continued initiatives around the under 25 sailing nation wide

Our two senior teams also did very well over the weekend, with Dave land and Sinead Enrights YaGottaWanna finishing in 14th overall in some very though conditions, with light winds and strong tides being the challenges face by the fleet all weekend. Our team lead by Stefan Hyde, got off to a very strong start and never looked back as they lead the event from start to finish, winning with one race to spare, from all accounts it was a very though series sailed in very challenging conditions but Stefan and his team stayed focused and never lost sight of the of the task in hand. Stefan and his crew Cillian Dickson, Gareth Nolan, John Malone and Graeme Grant sailed a flawless series to bring home the 2018 J24 National title. It was great to see so much activity by our club keelboat sailors over the weekend and hopefully it is the start to a great season of racing for our clubs members both at home and away. 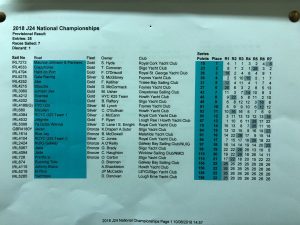