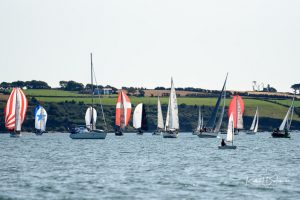 The following report is combined from all the Dinghy and Keelboat Class Captains/Committee Members.

Special Thanks to Bob Bateman for all the wonderful photographs.

The at-home Mixed Dinghy racing on Saturday and Sunday last in the RCYC had a good influx of Toppers and Laser 4.7’s added, which created a good social event on the water. Two races were sailed on both days in light winds and beautiful sunny conditions. 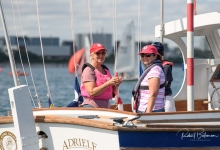 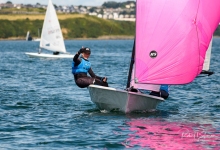 Congrats to Joe O’Sullivan who was 1st Topper overall , Patrick Bruen who was 1st Laser 4.7 and David Jones with Griff Kelleher as crew who were overall 1st place, tied with Adam Power and Ewain Chalmain but won on countback. There was some tight racing amongst the different fleets and it was good practice for Dinghy Fest. Great to see Erica Rhodes and Holly Fagan join the RS 200 fleet and they were putting the lads through their paces at stages. Also welcome to Andrew Kingston and his crew from Monkstown who are joining both the Topper and Feva fleet. 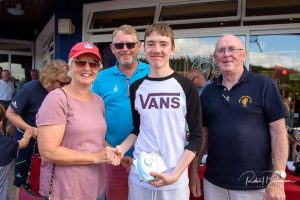 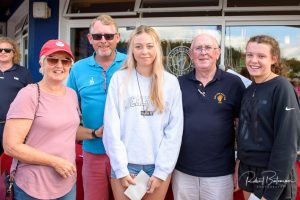 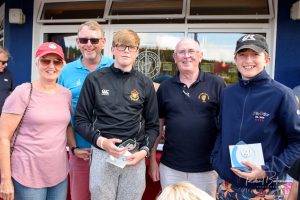 Thanks also to a great racing committee on the water in a newly refurbished Adriele, ably assisted by Conor Horgan on Mark rib and to all the rescue ribs and helpers on both days a big Thank you

The National 18’s managed six races under the watchful eye of PRO Jo O’Brien (using Mike Dwyer’s boat as committee vessel) on the Saturday using the eastern side of the Curlane bank. 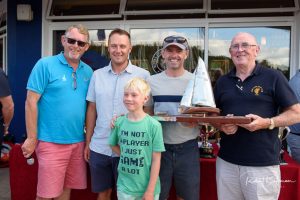 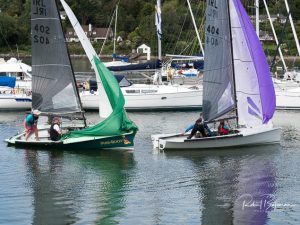 2019 RCYC Optimists At Home weekend got off to an overcast but warm start, with moderate winds and a falling tide.

The Race Officer for the Optimists was the RCYC Class Captain, Craig O’Neill, whom set out courses on the Curlane Bank for the 2 days racing. On both days there were 27 Optimists, made up of 18 Main Fleet sailors and 9 Copper Sailors, with a further 11 Tin sailors on the Sunday only. Main Fleet & Coppers had separate starts which all got off without any issues. The wind came from the mouth of Cork Harbour on the Saturday so the tide was pulling the starters over the line, which they had already experienced at the Nationals in Howth a week earlier so were well able to stay under the line, albeit with a bit of a struggle at first. 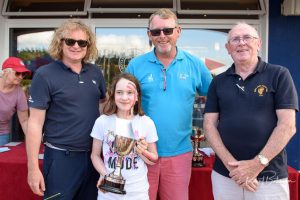 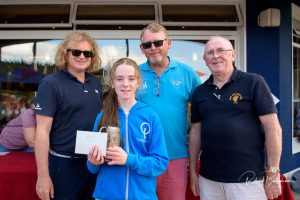 Day 2 was a different story, a blue sky and very light winds, which where coming from the opposite direction this time. The course was laid with a few alliterations due to wind shifts, but the the first race got off on time at 12:00 noon. The wind didn’t freshen at all, in fact it dropped. The Main Fleet got off first for their 3rd race, then 10 minutes later the Coppers started their 3rd race also. Once they had all finished a final Race 4 was started for the Main Fleet, but as the wind finally died off to nothing the Oppies where adrift so that race was abandoned, and no Race 4 was started at all for the Coppers. A series of 3 races were in the bag so all headed back to the Club for some fun and relaxation off the water. 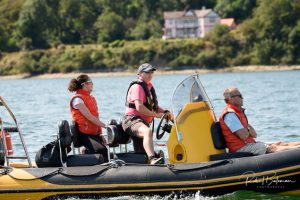 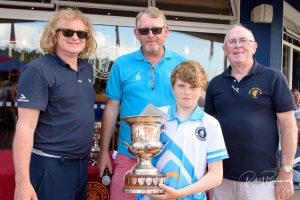 In the meantime our Tin sailors had a special 2 races put on for them within the bounds of the river opposite Currabinny Pier, 11sailors in total racing for their very first time! They did extremely well and thoroughly enjoyed themselves, very well done to them! We’ll have them in the Copper fleet before they know it!

A great day was had by all, and once again thanks to all the Oppie parents volunteering their time it was a great success too, many thanks to all!

Day one of the RCYC at Home got underway under the guidance of the Keelboat Rear Admiral Kieran O’Connell, with light breezes and flat seas. Sailing was challenging given the light breezes and tide with the sailors navigating their way outside Roches point and back into Cork Harbour.

In Spin 1 & Spin 2 division,  the Jones Family continue their excellent year with JellyBaby winning the first race of the day by six seconds on corrected time from Paul & Deirdre Tingle X34 with Ronan Downing taking third in a very competitive race.

The second race of the day got underway in very light breeze, however the competitive nature of the race continued. George Radley’s ½ tonner Cortegada took the win on corrected time by 33 seconds from Ronan Downing ½ tonner Miss Whiplash with the Jones Family taking a third setting up a very exciting final race to follow on Sunday

White Sailors were led out by Tom McCarthy’s ½ Tonner Bateleur who sailed an excellent race winning by 3 minutes on corrected time from Ria Lyden with Tom O Mahony bringing home a third and very challenging conditions.

Day two of the RCYC At Home Regatta began with light breezes a flat sea in what could be described as excellent August sailing conditions. Officer Of The Day Daragh Connolly set a Harbour course with the fleet starting close to Roches Point at the No 3 buoy. The fleet had to content with 8-10 knot North Westerly, a full tide and the expectation that the wind would reduce as the day progressed. A strong competitive fleet of 24 boats readied for the final race of the event.

Given the competitive racing on Saturday within Spin 1 & 2, four boats were strongly position to win the event overall.  Ronan & John Downing’s ½ tonner Miss Whiplash, The Jones Families J109 JellyBaby, George Radley’s ½ Tonner Cortegada and Paul & Deirdre tingles x34 Alpaca all within a couple of points of each other battling for the overall.

As expected, the racing was very close, Spin 1 & Spin 2 were fist off with JellyBaby hitting the start line at pace (Cian Jones on the Helm), and similarly Ronan Downing having an excellent start. White sailors lined up to follow with Ria Leyden’s X332 quick to take an advantage on the first beat, followed closely by Tom McCarthy. It was very much nip and tuck within the fleets, and with a shortened course being called by the Daragh Connolly given the reducing breeze, JellyBaby took line honours in Spin 1 and Spin 2 with Ria lyden taking line honours in White Sails.

Given the close racing, it was back to the club for the overall results and Ronan Downing’s Miss Whiplash the overall winner (on count back) from The Jones Family and Ria Lyden taking the white sail division by one single point from Tom McCarthy and crew. Prize giving was presented by the Clubs Admiral in beautiful August sunshine with a fun filled afternoon with family and friends. 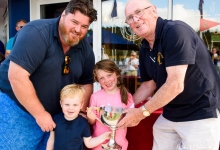 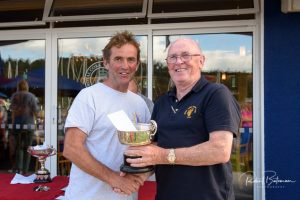 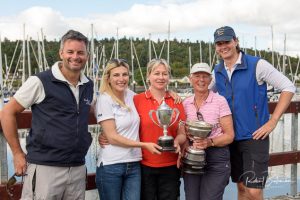 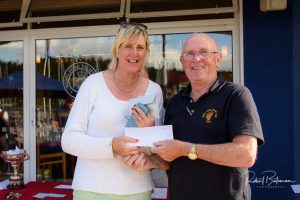 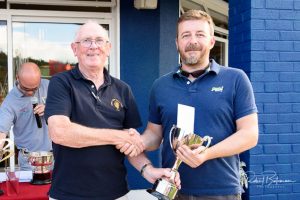 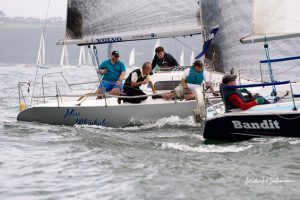 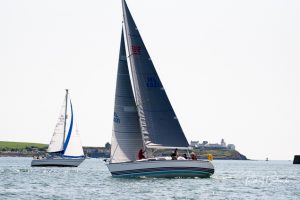 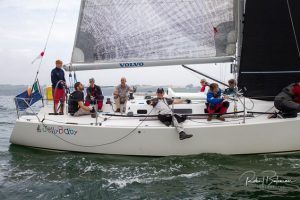 The Admirals Boules match was hotly contested as usual under the watchful eye of Paul McCarthy with John Roche winning out in the end. 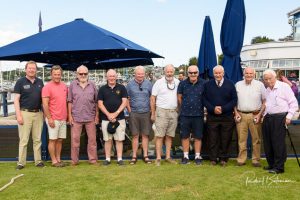 And to all the wonderful Ladies (aka Carol’s Girls) who put on a magnificent range of food for the hungry returning Sailors and the many members who joined us all on the day! 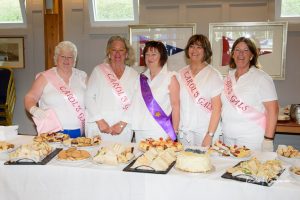 The Annual much coveted At-Home Crab Fishing contest was won by Oisin O’Callaghan with a Crab measuring (by the Master Crab Measurer Stuart Daly) of 95mm…! 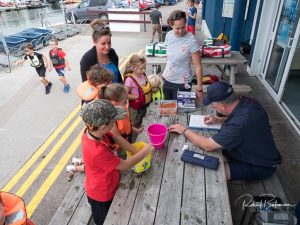 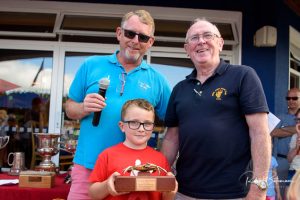 The boy’s were under pressure this year in the Tug Of War competition as the girls were the present holder of the Trophy – but it would appear that the training regime undertaken by the boys since the 2018 defeat has paid off with Dylan O’Sullivan captaining the winning side! 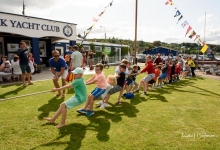 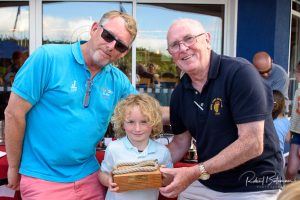 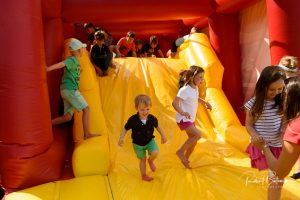 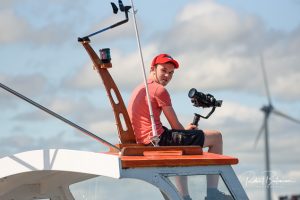