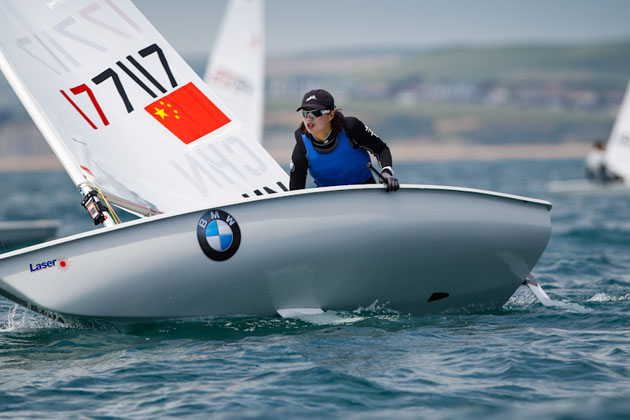 The London 2012 sailing venue served up similar conditions to that of day one with a building breeze across Portland Harbour and Weymouth Bay. All fleets took to the water in an average 4-6 knots which slowly increased to 8-10 knots giving the majority of fleets a full day of racing.

Returning back to WPNSA for the first time since claiming Olympic gold and becoming China’s first ever Olympic sailing gold medallist is Lijia Xu (CHN). The ISAF Rolex World Sailor of the Year claimed an impressive four races win ahead of fellow teammate Dongshuang Zhang (CHN) who posted four seconds to stamp China’s authority at the top of the Laser Radial fleet. Britain’s Alison Young is third after 4-4-3-3.

“Today and yesterday the wind is quite light so it’s not that much about physique, mainly it’s about the technique, the knowledge and observation which is why sailing interests me the most, it’s so smart and so intelligent. I just wish I could enjoy the physical part of sailing as well,” explained Xu.

On her return to the 2012 venue, Xu said: “This venue is very special to me. I think it’s just like home away from home so every time I come back to Weymouth I just feel very close to the venue and the town itself. The weather this year is especially nice with the sun shining every day.”

With four race wins today in the Laser Radial and a second on the opening day of the regatta, the Olympic champion admits that the fleet at this week’s Sail for Gold Regatta is a very competitive one.

“This year most of the sailors are from the UK and Ireland so there aren’t many other international sailors this time but it’s still a very competitive fleet because we are sailing together with the boys. At the moment physique is what I lack the most so my aims for this event are to try to improve my physique and do more hiking and hopefully by the time of the Worlds in October I can be fitter and sail faster in strong winds.”

Xu  concluded: “Tomorrow will be a good chance to practice my strong winds because there are so many good strong winds sailors from the UK and Ireland and also so many boys,.”  Agreeing with Xu’s comment, there are certainly many very strong sailors, including from the Royal Cork Yacht Club and other Irish club as today’s resuts show in the Laser Radial Class:. Séafra Guilfoyle RCYC, 5th,Finn Lynch NYC 6th and Fionn Lyden from Baltimore SC, 8th.  Annalise Murphy NYC, 9th, Cian Byrne RCYC 10th, Darragh O’Sullivan KYC, 13th, Sorcha Ní Shuilleabháin KYC 15th and Ross O’Sullivan KYC 20th. 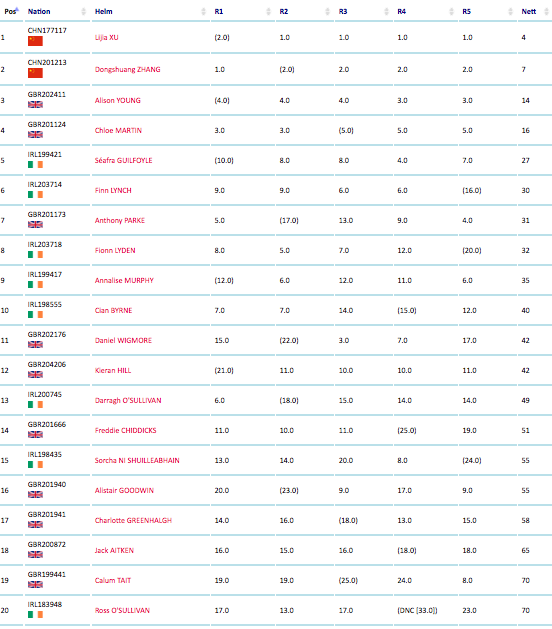 Racing is scheduled to start at 11am tomorrow (Tuesday 11 June) and if the expected winds with rain and a 14-18 knot wind forecast come true no doubt there will be considerable changes in the leaderboard.