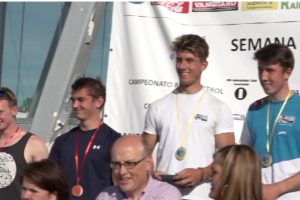 By Annamarie Fegan on August 16, 2017 in Junior Sailing, Latest

Royal Cork members Cian Byrne and Patrick Crosbie were third in the 49er Junior European Championship which ended in Spain yesterday. With 17 races, including 3 medal races they were 5th overall on results, but were awarded the bronze as two of the boats ahead of them did not meet the qualifying criteria. Well done to both on a terrific achievement in this highly competitive class.

Along with qualifying for gold fleet in Kiel week earlier in the summer, the pair now hope to build on this success when competing in the 4er worlds which are to be held in Porto later this month and we wish them success.