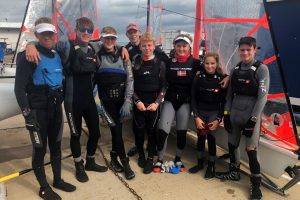 The “29er Ulster Championship 2018” was held at Ballyholme Yacht Club last weekend in Northern Ireland. The double-handed event, called the “Weekend of Speed”, included advanced skiffs like the 29er, 49er and catamaran multihulls. In the 29er class, the Royal Cork Yacht Club sent four skiffs that earned the top four spots at the event.

Designed to train youth sailors for the larger Olympic men’s 49er and women’s 49er FX, the 29er can reach speeds higher than the true wind speed when planing. Of the 8 Royal Cork youth sailors who participated in this weekend’s championship, nearly all have already experienced sailing the 49er FX in Cork harbour. Again, fabulous work by these dominant Royal Cork teams!