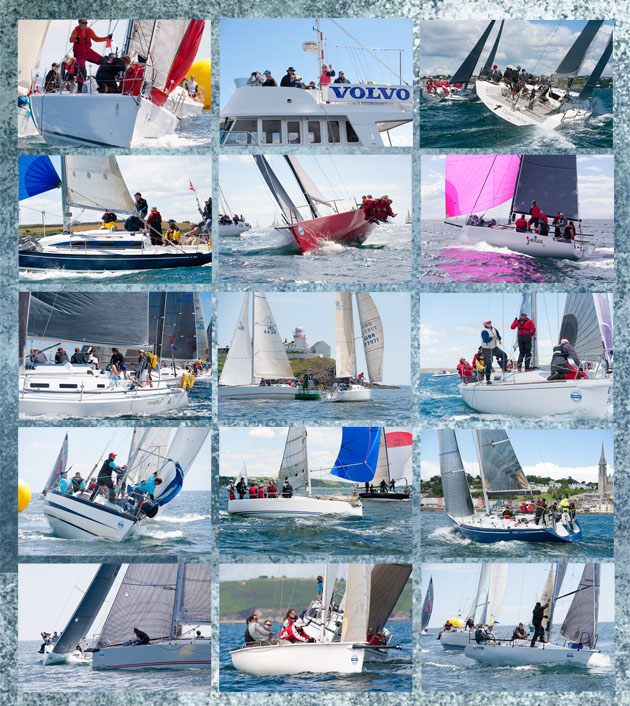 The penultimate day of Volvo Cork Week was to provide rather miserable conditions for the start of racing. Winds were very light and some voices were heard to wonder whether or not racing should have commenced when it did due to the lack of breeze. While there was nice sunshine at the start, the lack of wind posed a major problem and many classes had to watch postponement flags flying as the light rain came down on the third day of racing at Volvo Cork Week. However, the breeze stiffened somewhat during the day and with many classes now having completed six races, the discard has been applied and likely pretenders to the different thrones have become more apparent. 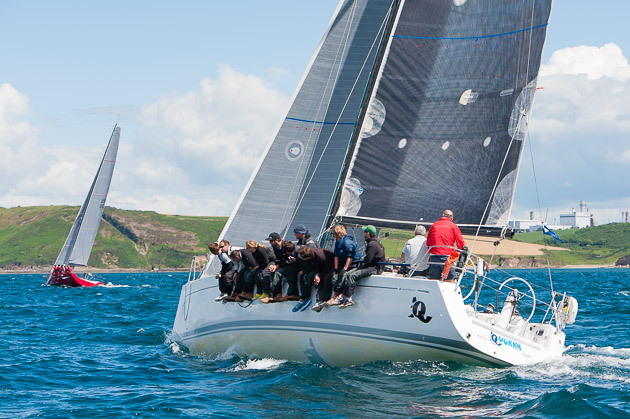 Today the crew on Quokka were inspired and unbeatable winning both of today’s races and opening up an 8.5 point gap in IRC Two. Tony Ackland’s Dubois 37, Dark Angel, a former Royal Cork boat (and native of the Parish!) still maintains second place but Denise and Conor Phelan’s Ker 37, Jump Juice, put in a brilliant effort and they are now placed third. 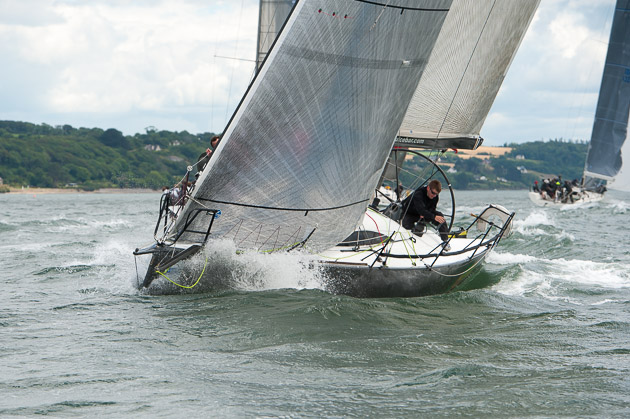 Fleet B, taking in IRC 3, IRC 4, IRC 5 and the Sportsboat Class managed three races on the Olympic Course, near Roches’ Point that saw some 40 yachts racing on a triangular course. 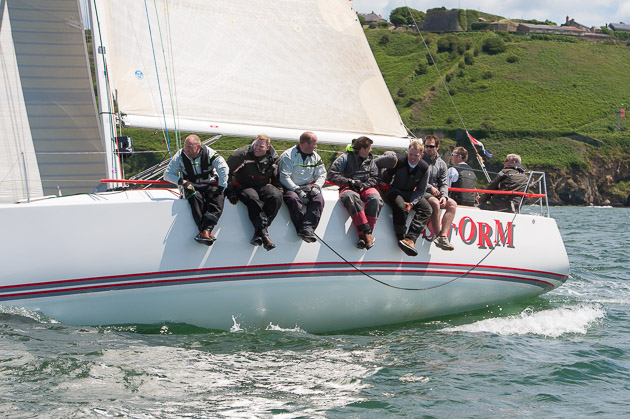 In IRC Three, Pat Kelly’s J/109, Storm still leads and with a 10.5 gap plus a discard of a fifth place, looks to have the class sewn up. Results show Paul O’Higgins’ Rockabill V in second place followed by Robert McConnell’s A35, Fools Gold in third place. This is arguably the most competitive fleet in the regatta.

In IRC Four, Tim Cunliffe’s Half Tonner, Insatiable, placed second in the 2012 competition, is the new leader with a 1,2,3 in today’s three races. Paul Tingle’s Corby 25, Alpaca has dropped to second place after struggling on today’s Olympic Course. Former RCYC Admiral Peter Deasy’s Bad Company had their best day so far, a win and a fourth place to move up to third overall in class. 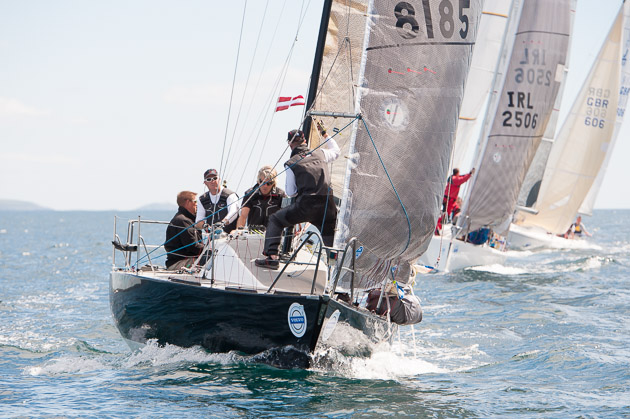 In IRC Five, it is now six straight wins to the Jason and Dominic Losty Illes Pitiuses from Cobh who enjoyed the absolute luxury of being able to discard a seventh first placing. However, the battle was not easy winning Race 5 by 6 seconds and Race 6 by 35 seconds. Diarmuid Foley’s Anchor Challenge is in second place followed by Kieran O’Connell’s Quarter Tonner, Bandit in third. 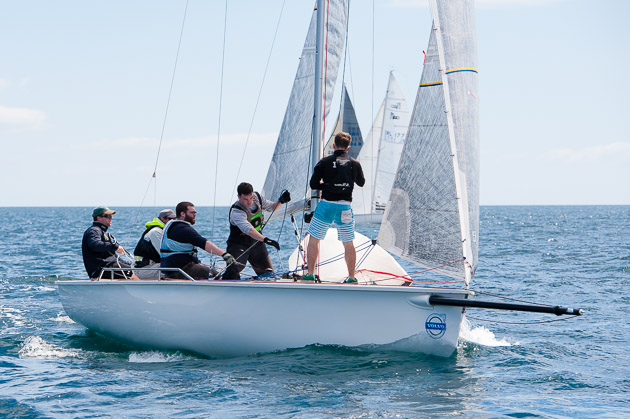 In the Sportsboat Class Robin & Ben O’Mahony’s 1720, Spiced Beef still leads the class after scoring a third and a race win today. Julian Cook’s Viper 640, Oh No, is 5 points behind Spiced Beef but a fifth in the last race means that Spiced Beef have a five point lead for the series. Denis Murphy’s 1720, Aquatack scored three second places today to move up to third for the class, just a point behind Oh No. 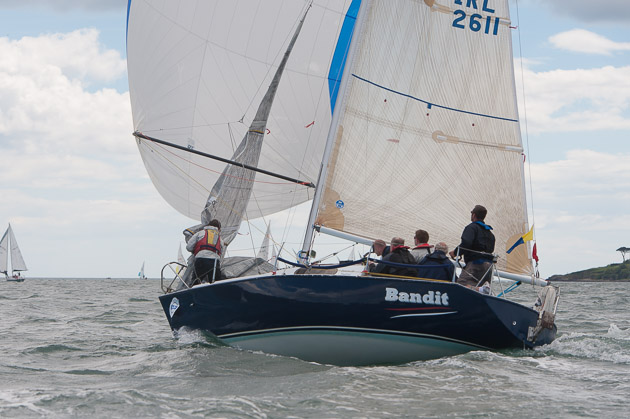 In IRC One White Sail, George Pettifor’s Beneteau 36.7, Foxtrot had an outstanding day in Cork Harbour, winning both of today’s races to become the new class leader. John Downing’s Samba drops to second place, just two points off the lead. Peter O’Donovan’s X-372, X Tension scored a second and third place today to move up to third for the class. 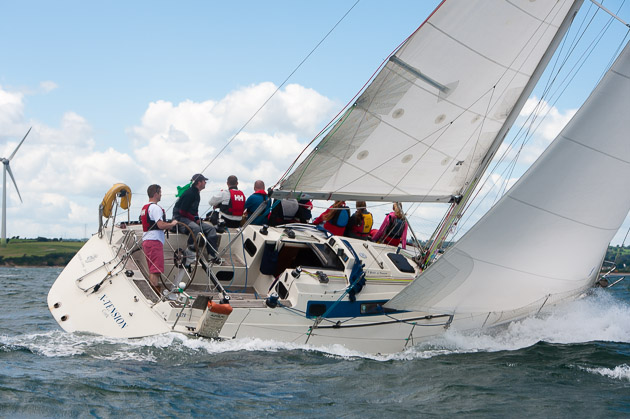 Tomorrow (Fri) will see the culmination of the week’s efforts and the presentation of the magnificent array of prizes,