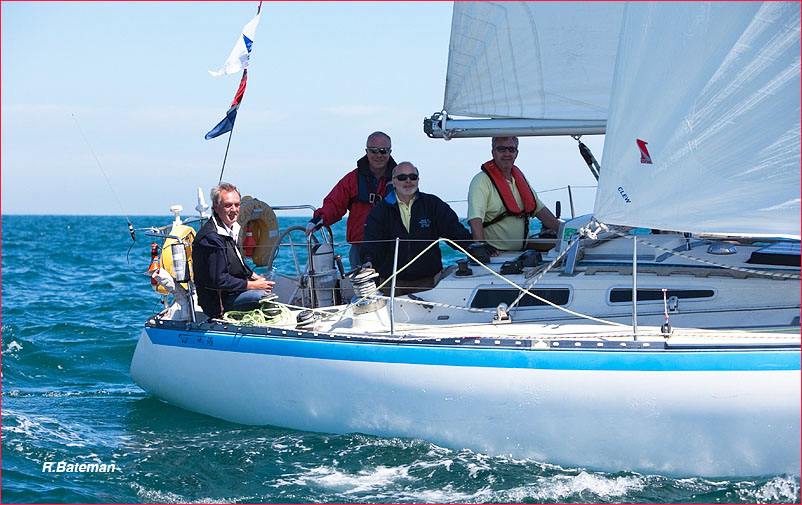 No stranger to the Round Ireland Race. Ian Hickey's Cavatina on the start line of the 2010 event. Picture Robert Bateman.

2012 will mark the 32nd anniversary of Ireland’s premier off-shore sailing event, organised by Wicklow Sailing Club in association with RORC.

For the first time the Biennial Round Ireland Race appears on the 2012 calendar of Royal Ocean Racing Club events (RORC).   This is a huge boost for Wicklow Sailing Club as results from this Irish 704 mile race will now enjoy the same status as the Round the Fastnet Race and will count for 1.5 points in the RORC season thus raising the attractiveness for skippers to enter.   Wicklow’s Chairman of the event, Denis Noonan, is well chuffed with the news and expects a strong Irish turnout for the event in June.

The  Round Ireland Yacht Race will depart from Wicklow Bay at 12 noon on Sunday 24th June 2012, leaving Ireland and all its islands to starboard. It is the longest race in the Royal Ocean Racing Club calendar, comparable to similar Offshore Races such as the Fastnet, Malta Middle Sea, Sydney-Hobart and China Sea races. The first race took place in 1980 with only thirteen boats. Since then, in the biennial race, the fleet has grown steadily, and some sixty yachts are expected to be at the start line in 2012.

Sailing around Ireland poses many challenges for boats and crew, with open ocean on the south and west coasts, tidal challenges on north and east coasts apart from all the off lying rocks and sandbanks to keep navigators on their toes and not forgetting the vagaries of the Atlantic weather systems. This is very much a sailors’ race but armchair spectators can follow the race on their computers, thanks to modern race tracker technology.

A Round Ireland Sail Fest (Thur 21 – Sun 24 June) will complement the race preparations and add a welcome level of fun and entertainment always provided for those  travelling to Wicklow for the race start.