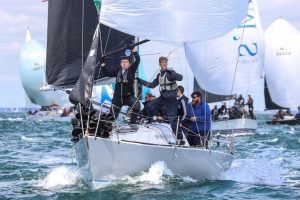 Ronan Downing was crowned virtual Champion of Champions in last night’s nail biting finale. With twenty of the club’s best virtual sailors qualifying for the final, it was always going to be hotly contested.

Admiral, Colin Morehead, opened the Zoom meeting with a virtual prizegiving for all fleets and over 50 households were in attendance. Colin commented on how great it was to see the club and it’s members continue to stay engaged through these difficult times. Colin also encouraged anyone interested in taking part in Virtual Racing to do so by joining any one of our many leagues. Newly elected President of Irish Sailing, David O’Brien, also joined the session and discussed how Irish Sailing are currently working with Sport Ireland to understand the implications of the government roadmap on our activities; guidance will be available very soon.

North Sails and RopeDock sponsored leagues in April so thank you to them and we wish them all the best as we hopefully return to sailing soon.

Racing kicked off at 19:00hrs with a 6 race series allowing one discard and the final race being a double points non discardable race. J70’s were the boat of choice for the first three races and 49ers for the final three races. Spectators who joined on Zoom were able to view the racing and were treated to commentary from Nicholas O’Leary, Séafra Guilfoyle and Cian Jones.

With five different race winners over six races, it was thrilling to watch.  Virtual Racing veterans Ronan Downing, Daragh Connolly and Donal Hegarty were proving hard to beat. Thankfully Laser sailor Harry Pritchard was keeping the boys honest and was in the hunt right up until the end, including a win in race five. With five races completed, Daragh Connolly had a commanding lead going into the sixth and final race but disaster struck at the start when he was over the line and infringed another competitor, instantly ruling him out of contention. Oppie sailor Liam Duggan and Topper sailor Joe O’Sullivan had a great battle but Ronan Downing’s speed proved too much and as he passed the lads downwind to take the lead which he held through to the finish. This meant Ronan took 1st place overall in the series, Harry Pritchard was 2nd and Daragh Conolly managed to climb back up to 9th in the final race which game him 3rd overall.

Well done to Ronan and thanks to all for joining and taking part on the night, our sponsors and of course Siobhan Carmody for managing results.

Those looking to join in on the fun can join one of the May leagues which will commence soon, details are here.