Wild Oats XI has claimed first bragging rights in the 2013 Rolex Sydney Hobart, leading the fleet out to sea after one of the fastest, most exciting starts ever. 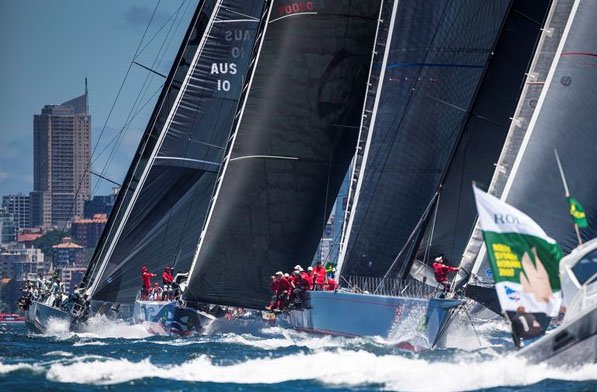 After a cloudy, nondesript  sort of Boxing Day morning, the sun finally emerged an hour before start time, and with Sydney Harbour looking picture perfect you could almost see the intensity building as the fleet jostled each other along the three separate start lines in a 12 to 15 knot south-easterly. 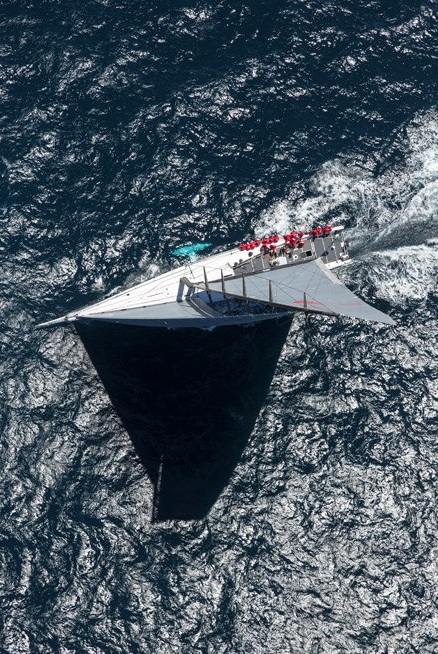 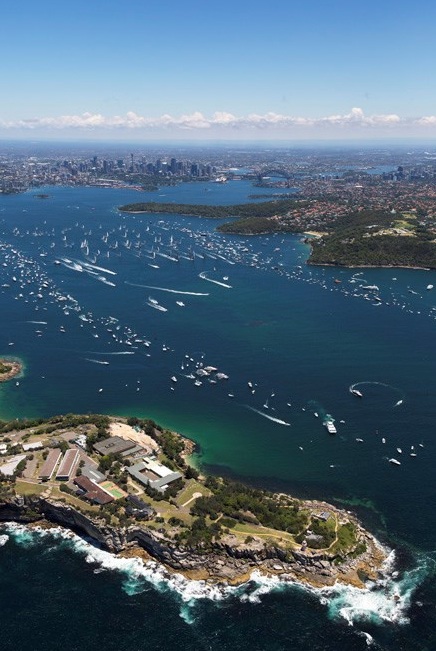 There were three lines in the Cruising Yacht Club of Australia’s annual 628 nautical mile race, because the 94-boat fleet could not all squeeze onto the traditional two.

On the front line it was quickly clear that the western, pin end of the line was where the biggest, fastest boats wanted to be.

Only Peter Harburg on his VOR 70 Black Jack seemed content to start his race close to the eastern shore.  But when the gun went off, it was Syd Fisher on Ragamuffin 100 who grabbed Wild Oats XI’s favourite spot at the very pin end in a superb start. 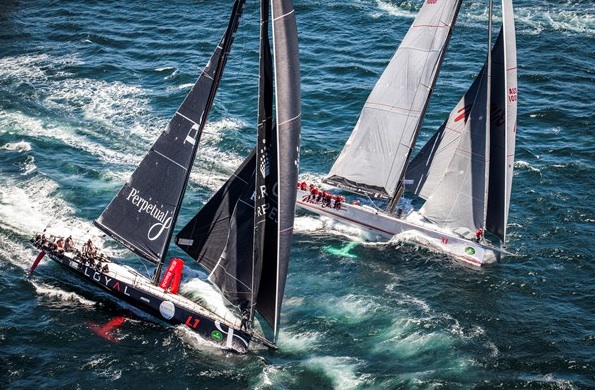 Yet in the end it didn’t seem to matter. Wild Oats XI took off, with Perpetual LOYAL (Anthony Bell) close behind and above her in a classic big boat drag race to the mark. And right behind Perpetual LOYAL, Beau Geste, the Hong Kong 80 foot black hulled boat was smoking.

Karl Kwok’s brand new Hong Kong entry is the dark horse in the race for line honours. A completely unknown quantity, and very fast.  At times she appeared to be gaining ground on the two bigger front runners and looked faster than the other 100 footers, Ragamuffin and Wild Thing (Grant Wharington).

As Beau Geste’s sailing master, Gavin Brady predicted, she pulled away steadily from the nearby VO70 Giacomo (Jim Delegat). Maybe this was no surprise, but it certainly was a revelation.

There are three turning marks, stretched across the Heads, to compensate for the distance between the three start lines, then out to the sea mark where the fleet can finally turn south for Hobart.

It has been 19 years since there were three start lines. Whether this confused the navigators, or because of the tactical battle being waged by the front runners, the five leading boats seemed to head up too quickly towards the open sea, overlaying the mark which floated hundreds of metres further downwind.

Suddenly Wild Oats XI peeled away, closely followed by Perpetual LOYAL and rushed to the mark where there appeared to be some confusion at the marking turning. And then a protest flag appeared on Perpetual LOYAL’s backstay.

The confusion opened the door for Beau Geste. By the time Wild Oats XI swung around the mark, the smaller boat was right on top of her.

It would be Beau Geste second out of Sydney Harbour, not Perpetual LOYAL. Black Jack, which had raced on its own along the unfavoured eastern side of the Harbour, Giacomo, Ragamuffin 100 and Wild Thing came next.

It had all barely taken eight minutes.

As soon as she turned into the wind and the choppy, confused seas between the Heads, Wild Oats XI put a reef into her giant mainsail. Perpetual LOYAL powered on under full sail. These early conditions, beating into a stiff wind and rough sea is expected to favour the wider, more powerful Perpetual LOYAL over her narrower lighter rival.

And while the reefed Wild Oats XI was no slower than Perpetual LOYAL as they buffeted their way out to sea, it did appear that the latter was pointing just a few degrees higher.

Meanwhile Beau Geste hung on, still fast but needing to free up those few extra degrees to power though the chop.

The remainder of the fleet powered out through the Heads behind the front runners, enjoying their own stunningly fast start.  Within 25 minutes even the slowest boats had cleared the Harbour, an astonishingly short time. And a remarkably near-incident free start for such a large fleet.

There are a number of well known Irish names sailing on the Australian Beneteau First 48 ‘Breakthrough’ all from the Royal Irish Yacht Club in Dun Laoghaire and including No. 2 to the owner  well known International Yachtsman and Cobh native Barry Hurley. The other Irish names on ‘Breakthrough’ are Kenneth Rumball (Watch Leader), Keith Kiernan (Navigator & Radio man), Catherine Halpin (Bow-Woman. The crew began racing this morning (26th of December) from a start inside the heads of Sydney Harbour.   “The 628 nautical mile race should take the crew approximately five days, hopefully arriving on the the 30th of December, according to Watch Leader Rumball, a principal of the Irish National Sailing School in Dun Laoghaire. Other crew members include Nick Martin from the UK (Watch Leader), Ben Hunter (AUS), Tom Guy (AUS), Mathew Vadas (Owner & AUS), Mark Gentilli (UK) and Wlodzimierz Pankanin (AUS). The Irish/UK/AUS crew have spent the last three days training in Sydney ahead of the race.

Brindabella was the only casualty, having to re-start after crossing the line before the start cannon was fired, and shortly after the start, Rod Jones reported from his Queensland yacht Audi Sunshine Coast, that he had retired with rig problems. “The Code Zero masthead fitting failed, so the halyard tore down the side of the mast to the hound fitting – about a metre, and I felt it prudent not to continue on” said owner Rod Jones, who added: “Subdued would be the best way to describe how I feel – disappointed.”

Then at 16:21hrs, Anthony Bell skyped: “Just had team meeting; decided not to proceed with protest. At first we thought we may have been fouled – but….”

So this race has begun as it will almost certainly continue, full of surprises, at a hectic pace, and with absolutely no quarter given or asked for.