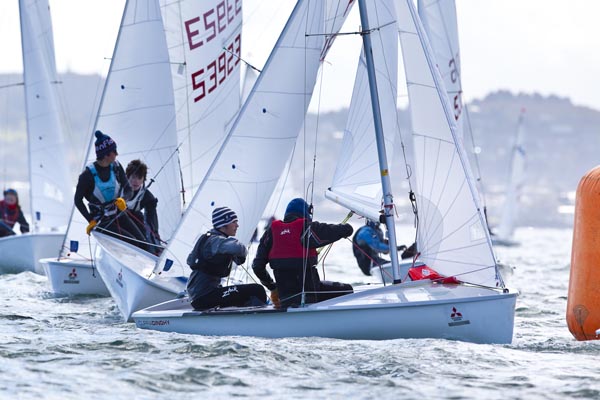 In the battle for Worlds selection among the Irish 420 crews, the odds today moved in favour of Cork’s reigning ISA Optimist Youth National Champion, Patrick Crosbie with crew Grattan Roberts from Royal Cork Yacht Club.  They improved race by race, scoring 7,6,5, to move up to sixth overall in the international fleet but crucially gaining themselves a 17pts cushion on their nearest selection rivals Robert Dickson and Sean Waddilove of Howth YC.

“We were just concentrating on keeping clear air and following the gusts as much as possible. We are certainly better in the stronger breeze but  we are also grand in the light stuff. We only started sailing together in August last year and would love to do the Worlds here in the summer. I don’t want to say how confident we are, not wanting to jinx anything. We have a friendly rivalry between us all, but for sure there is more pressure this year with the Worlds here, but I like to think we are rising to it.” Said helm Crosbie.