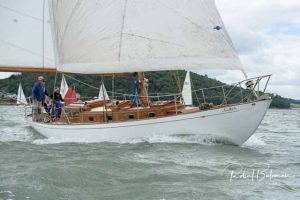 By Communications on December 3, 2020 in Latest, Yacht Cruising

WM Nixon this week detailed the journey so far in the regeneration of the O’Leary family’s classic 50ft 1949-vintage sloop Northele.

In her seventy years, Northele had been around the block, and then some, for after the first owner Ronald Burton sold her, among other experiences she was in Plymouth and did a Round Britain and Ireland Race, she also found her way to the Caribbean, and then was based in the Clyde when a first Irish owner in Meath brought her to Ireland and based her in Kinsale, following which she was in Cork ownership and moored serenely at Crosshaven, waiting for Anthony and Sally O’Leary to take notice and be smitten.