By Orla Keane on March 8, 2016 in Junior Sailing, Optimist 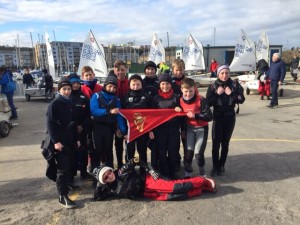 On last weekend 5th/ 6th March, 13 of our sailors went to compete in the above. It was a very well run event hosted by Cardiff Bay Yacht Club with the sailing area right outside their modern clubhouse which, for the parents, made for comfortable viewing at least on the Saturday as the weather was cold and breezy. Cardiff has now in recent years been developed a top class dinghy sailing venue, with little rise and fall and good facilities because of their tidal barrage and lock gates. The only downside apparently is the larvae of immigrant ‘killer shrimp’ which require all optimists and ribs to be power hosed on exit  from the water at the end of the event! 13 of our sailors took part in a field of just under 170 boats. The first day was 12-16 kts NW very shifty with 4 races with two divisions then divided into gold and silver fleets for day 2.

In Gold Fleet, congratulations to Harry Twomey who finished 8th overall showing great speed and tactical awareness. Also congratulations to Alfonso Moreno who improved as the weekend progressed finishing 14th and Rory O Sullivan in 26th – coming good with a good win in race 6. Michael Crosbie was 7th Junior overall in 29th place with a solid performance followed by Rob Keal  who sailed very well on day 1, then Justin Lucas, Conor Horgan and Aoife Byrne. In Silver fleet, congratulations to Harry Pritchard who took 5th silver followed by Adam Power, Eoin Horgan, Patrick Bruen and Simon Pritchard, many of whom were quite unwell the first day and couldn’t complete some races.

There was a huge effort put in by many people to get these sailors on the water, fed, watered and minded as for some it was their first big event. I would like to thank Pat and Charlie, who with Thomas the first night got the boats unloaded as our flights were delayed. To Tony, Rae, William and Tim who travelled with me keeping an eye on our sailors many thanks for their tireless efforts. It was a great experience for our sailors and a good warm up for many of the above as they will be doing trials at Howth later this month. This weekend its back to club based coaching for many.