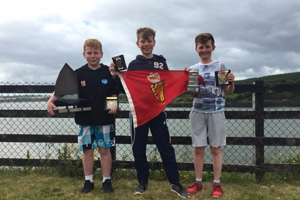 Last weekend 22 of our sailors competed at the above kindly hosted by Foynes Yacht Club. A grateful thanks must be offered by us to a most welcoming club who are developing their own fleet. I believe no-one went home hungry and every effort was made to ensure the event was a success! Foynes being on the Shannon Estuary means that the event was severely tidal which hampered the Race Officer and any breeze under 5 Kts means that racing is almost impossible for the class. This eventuality meant that Saturday had no racing for the main fleet while ironically the Regatta Fleet had a great time tucked up alongside Foynes Island.  The sailors made their own entertainment as per the video clip at the bottom of this post!

On Sunday the fleet went to sea again and this time were rewarded with NW 10-18 Kts. There was good close racing in both Senior and Junior fleets, 3 races for each which constituted a series but no discard which cost some severely but did reward consistency. As the tide turned there were some startling turns of speed upwind and some interesting swamping downwind for the unwary!

In a Senior fleet of 40 competitors Rory O’Sullivan gave himself a perfect going away present for the World Championships in Portugal with a most consistent 2,2,3 to win comfortably with Killian O Regan in 4th and his brother Cathal (having won race 1) in 8th, Harry Pritchard in 9th, Cillian Foster in 15th, Diego Peletiero in 18th and Kate Horgan in 28th.

Last but not least were our Regatta sailors of Alana Twomey, Emmet Lucas, Charlie Venner and David McSweeney who sailed 9 races between them and acquitted themselves well in challenging circumstances.

Well done to all. Next up is the Team Racing event the VP Trophy at Malahide on Friday July 1st just prior to the Ulsters, that weekend the 2nd and 3rd of July, at the same venue.

Pictured are our 3 prize winners Rory, Jonathan and Michael. 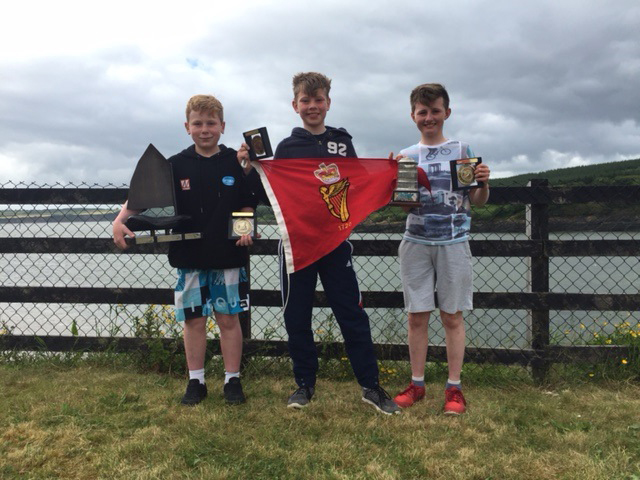 As well as some fun afloat. It might be my age but I haven’t a clue what they are singing! 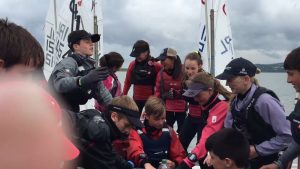