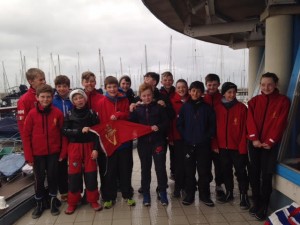 A selection of the RCYC Team at 2016 Trials, Howth YC

The 2016 Trials for the Optimist class took place last weekend alongside the Youth National Championships, kindly hosted by Howth Yacht Club. This 4 day event ran from Thursday to Sunday unfortunately losing the Friday racing due to strong winds. RCYC had 19 sailors present and all sailed their socks off across a mixture of conditions from near no wind to 20+ knots. There were 11 races in total and the Royal Cork finished with 6 sailors gaining representative status.

After the first day RCYC led the field with Junior sailor Michael Crosbie leading overall closely followed by Cathal O Regan, Harry Twomey, and Rory O Sullivan, then followed by Justin Lucas, Rob Keal, Killian O Regan and Aoife Byrne. On the Saturday however it was a different story with more established sailors joining Harry,Rory and Cathal to mix it up. This resulted in the leaderboard changing with Michael and Cathal dropping down. On the final day Cathal, in his last year in Oppies, put in a strong performance to finish 4th overall. Top-ranked Junior last year Rory finished 5th so both made the Worlds Team in Portugal next June. Harry and Michael finished 6th and 7th respectively to make Europeans to be held in the South of Italy in July. Justin finishing 12th making IDT in France. Congratulations too to Rob Keal who finished 11th overall (IDT ineligible) and to Killian O Regan who made the new IODAI team going to Poland.

There were battles all the way along the fleet – Aoife Byrne, Cillian Foster, Harry Pritchard, Jonathan O’Shaughnessy, , Conor Horgan and his brother Eoin (who had a very creditable 4th early on), Richard McSweeney, Jack O’Sullivan, Ben O Hare, Adam Power, Patrick Bruen and James Hassett . For some it was their first trials, as some are only 11 years old and a great experience – for others they will have gained further valuable experience in sailing in a competitive fleet which will stand them in good stead for the future. The event is unusual compared to others both in the lead up to it itself and also the rewards on offer which lead to peculiar pressures on both competitors and their parents. Having such a large group from one club means that only a minority will achieve a place on a team- all of our sailors did very well and we are very proud of all.

On behalf of the RCYC I would like to thank Howth YC and IODAI for running the event and for their hospitality. For those competitors who made teams I understand that IODAI plan to mark their achievement with a separate presentation at one of the forthcoming Regional events. 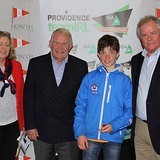 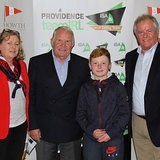 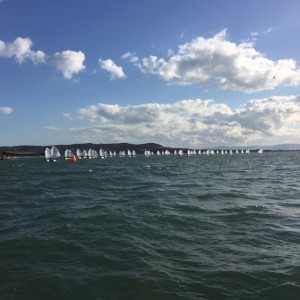 The fleet approaching the gybe mark