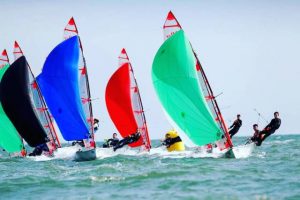 The dinghy committee have been extremely busy since January across all the programs as we ramp up for the busiest part of the season ahead.  Without covid lockdowns this spring, the dinghy fleets resumed after the Winter break unhindered. Poor weather in February meant a slow start, but March and April were busy as sailors skilled up for the season ahead.

Training for the optimist mainfleet continued over the Winter, training was bi-weekly with intermittent clinic during school breaks. The program was lead on the water by International coach Denis Paaske, ably assisted by club coaches. By the the end of the Winter/Spring program, Class captain Rob Bateman was delighted with the progress made and the enthusiasm shown by all the sailors. The optimist copper/tin fleet braved the elements around St.Patrick’s weekend, a much earlier start to the season than normal. More recently, Jim Hughes has joined the optimist committee as coordinator for the growing tin fleet.

The topper class returned to sailing in early February to restart the program which would see them prepare for the Topper World Championships at Lake Garda in July and the many Topper events around the country in the meantime. Attendance at the training sessions has been fantastic to date as momentum builds towards a busy season.  Class Captain Sophie Crosbie has been kept busy implementing the Spring program as well as on-boarding the many sailors joining the fleet.  2022 Topper events are underway since St. Patrick’s weekend with the Topper Winter Championship at RNIYC.

The ILCA(formerly laser) fleet also started back in February and its great to see the good numbers attending training. The growing number of ILCA6 sailors in the fleet is encouraging with many young sailors taking the step up and choosing to stay sailing dinghies. Class Captain Tim McCarthy was very pleased with numbers competing at the first Irish ILCA event of the season with the ILCA Munsters in Baltimore over the Easter holidays.

The 29er fleet restarted their season over the Easter break. Though many of the more experienced 29er sailors had already been away at international events. Class Captain Saki Curtin outlined his plans for the fleet at a kickoff meeting earlier in the season, and noted that three club 29ers were now available. The generous donation of three 29er dinghies to the club by the Kohl family last Winter offers a great chance for the relatively new fleet of sailors to skill up and get ready for club racing and the Irish 29er event circuit which already started last weekend with the 29er Western championships 2022 at Tralee Bay Sailing Club.

Charles Dwyer organised the National18s class with a February start to the season, and have been busy club racing throughout April.

Junior Organiser Neil Barry has been busy with Miriam in the office building the program of Irish Sailing Summer sailing courses at RCYC which are now reaching capacity.

The Team Racing training was busy under the guidance of Richard McGlade most Sundays on the Irish Sailing fireflies. Royal Cork sailors were to the fore for all the Munster schools in the recent Schools National Team Racing Championship 2022 at RStGYC.

May – A busy month ahead

All the fleets continue their busy training programs under the guidance of the Head of Sailing Development Ed Rice. Club racing starts in May with saturday racing for optimist, topper and ILCAs. The event season has started in earnest and continues apace for May and into the Summer.

The optimist IODAI Munster Championship at RCYC will be held at the club on May 21st-22nd. This will be a great opportunity for even the youngest and least experienced optimist sailors from the tin/copper fleets to begin their optimist racing careers.

The Adult dinghy program starts this month as part of the Adult Sailing Courses.

Plans are currently underway to launch the 2022 Cadets and Junior Sailing Academies in June with the slot due to be advertised in the coming week or so.

We hope to restart the mixed dinghy fleet with the club dinghies which are currently being conditioned for the busy season ahead.