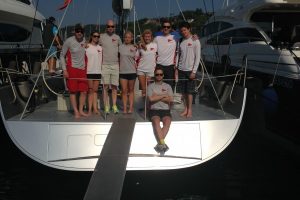 By Kieran on September 12, 2014 in Uncategorized
#2kteamracing – Teams from Howth Yacht Club and the Royal Cork Yacht Club travelled to Porto Ercole, Tuscany for the Italian- Cala Galera leg of the 2014 2K team Racing Circuit, from the 5th to 7th of September. Both teams enjoyed high intensity racing, some very tight matches, exceptional racing conditions, and beautiful scenery.

The Royal Cork team, led by skippers Fred Cudmore and George Kinsgton won 6 of the 9 races in the round robin, over the first and second day of the event. They went into day 3 of the event in second place, and faced the highly experienced 2K racers, Yacht Club Costa Smerelda in the first to two wins semi final. Racing went down to the wire, but unfortunately YCCS won 2-1. The Rebel army won their petit final, against the British Team Magnum, finishing the regatta in 3rd place. YCCS stormed on to beat the Rome Racing Team in the final.

Howth Yacht Club, competing at their first 2K event, had a slow start getting in only two races of their round robin on Friday. With more breeze on day 2, skippers Simon Rattigan and Geoff Tait were more in the groove of the 2 v 2 racing and they went on to win 4 from 7 of their races. On day 3, the team had the best seats in the house to watch the gold fleet finals, from their luxurious changeover yacht. They then took part in the “king of the castle” silver fleet final, and finished the event in 9th place.