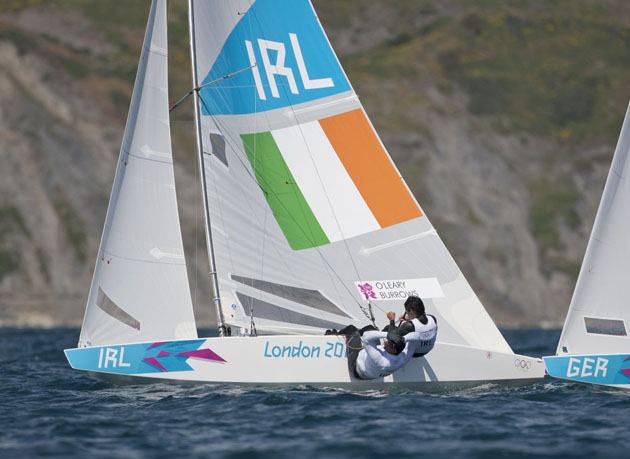 Today was a lay day for the Star Class and they will resume racing tomorrow (Thurs).  One of the most fascinating aspects of watching this Olympic Regatta, particularly the Star Class, has been that the television coverage has been magnificent particularly when we are getting the live views of the racing from the helicopter with the gyro stablised camera.  Could one ever forget the intensity of the downwind leg and the battle between Scheidt and Prada and Percy and Simpson on Sunday. The physicality and their work ethic were simply amazing and it was edge of the seat television until the finish.

Going into the Star Class racing tomorrow (Thurs) with four races and the medal race to go, three contestants are clear ahead, GBR, BRA and SWE.  Immediately following there is a bunch of six competitors with only seven points separating them and they are NOR 29, POL 29, USA 30, GER 31, NZ 32 and IRL 36. With four races still to go plus a medal race counting double points, there is plenty scope for movement up this ladder by O’Leary and Burrows currently lying in ninth position overall.

Racing was tricky today for most fleets with frequent postponements and recalls. Race Five for the Laser Radials had to be abandoned and rescheduled for 20 minutes later. Annalise Murphy got off to a good start towards the top of the fleet and she rounded the first mark in eighth place. Her position fluctuated slightly throughout the race but ultimately she finished in eighth place with Evi Van Acker (BEL) and Alison Young (GBR) taking first and second places respectively.

Race Six saw Murphy get off to a good start at the top of the pack but she chose to take the left side of the course while her rivals veered to the right and within moments it was clear they had made the correct choice as they very quickly gained a fifty metre lead. Murphy then had the difficult task of making her way back across the fleet. It cost her one hundred and fifty metres and left her in twenty second position rounding the first mark. She fought hard throughout the rest of the race but couldn’t make up the distance and finished in nineteenth place.

The discard was applied today for the Radials after the fifth race. This meant Murphy could discard her nineteenth still leaving her first overall on 12 points but only two points ahead of Evi Van Acker (BEL) on 14 points and with Marit Bouwmeester (NED) in third position on nineteen points. Tomorrow (Thurs) will be a lay day for the fleet. They will sail a further four fleet races two each day on Friday and Saturday, and these races will be crucial for Murphy to (a) get her into the medal race on Monday and (b) it would be desirable that she would have a sufficient cushion of points as this race will count for double points and could pose problems for her in the event of light winds.

Racing will continue tomorrow for the 49er and Ger Owens and Scott Flanigan will also make their debut in the 470 class. The Laser Radial and Laser will be on a rest day.

Sailing action will start at 12 noon in Weymouth.