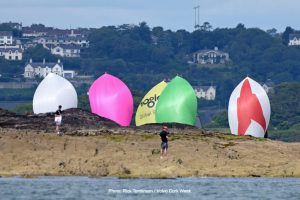 July and Volvo Cork Week have come and gone with the blink of an eye. What a great week Volvo Cork Week was. Great weather and fantastic racing for all. Thank you to all the club volunteers that made it happen. See some great photos on the Club website Gallery. Roll on 2024.

Congratulations to our league winners for July. Friday night Whitesail June/July league was won by Scribbler II followed closely by Thistle in second and Fast Buck in third.

All of our sailors and boats racing in Calves Week are having a great weeks racing with the exception of Tuesday when there was no racing due to fog.

Note the Club ‘At Home’ is planned for Saturday 27th and Sunday 28th August. All boats are asked to partake in our Club Regatta.

We will also have a Club Women’s team travelling to Dublin that weekend to race in Irish Sailing’s Women’s Regatta. Any female sailors interested in competing please contact me at keelboats@royalcork.com.

Please also note our Club Dining continues through out the summer. This fantastic club facility needs constant support to maintain its high standards. Please support it as best you can. Contact the Office, Anne or Amy for bookings and further information.