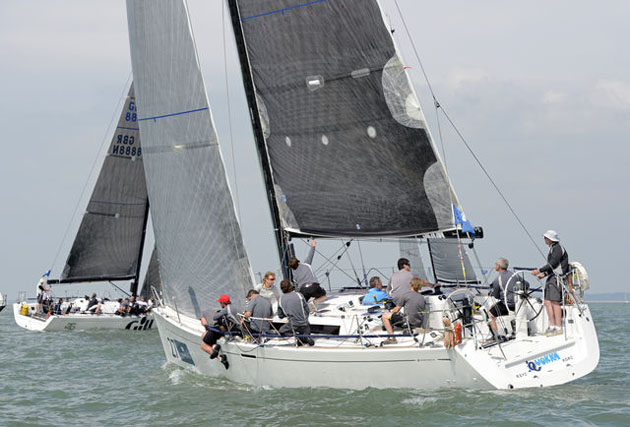 As the Brewin Dolphin Commodores’ Cup regained it’s racing programme at Cowes today, Team Ireland emerged with a strong 99.5 point advantage over it’s nearest challenger defending title holders Britain Red. However, here a word of caution; Ireland is a lone team consisting of three boats against four teams from France and four teams from Great Britain and there is a lot to play for.

Three windward/leeward courses were sailed in testing conditions and heat that reached 30 degrees celsius on the Solent. The breeze rarely exceeded 8 knots and an ebb tide of up to 2.5 knots crossed the course area.

Both Marc Glimcher’s Catapult and Quokka 8 chartered by Michael Boyd and Niall Dowling had their best results to date with both crews scoring second places in the 27-strong fleet. Catapult has been engaged in a constant battle with rival Ker 40 Cutting Edge for Britain Red, the lowest scoring boat of the series so far.

While Ireland has a comfortable cushion in the event that started on Sunday, two races remain in the schedule both of which will be scored with co-efficient point scoring.

A race around the Isle of Wight is planned to start at 10.00hrs tomorrow although nothing is certain that this can be completed with a north-easterly airflow expected to create a wind shadow to the south. A points multiplier of 1.5x applies to this race.

A short inshore race, probably a windward/leeward, is planned for Saturday morning, which is double-scoring, to round off the event. The racing to date fills the requirement for a series in the event of lack of wind tomorrow.

Tomorrow’s race scheduled for round the Isle of Wight is a 55 mile course and we wish the team good luck.