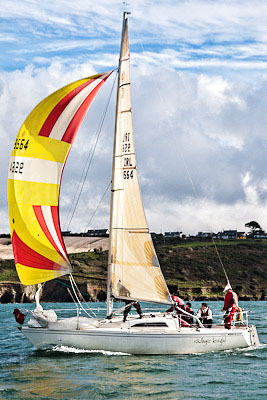 The final day of the Marshall Marine Textiles Winter League again provided another very enjoyable   day of sailing with sunshine and 8 knots of breeze.  Race Officers for the day were Brian Cudmore and Douglas Deane.

There was a short spinnaker run from Grassy to Cork Beg and then on to No. 20 off Cobh following which the fleet left Spike to port. They then went on to leave Numbers 7 and 5 to starboard before rounding Cage followed by another short leg to No. 5 before finishing on the Grassy line.

After racing the sailors returned to the comfort of the warm clubhouse to watch the Leinster match followed by a session of Christmas music and song thoroughly enjoyed by all.

An excellent Winter League like this makes the winter short taking the fleet right into December and many thanks to Richard Marshall of Marshall Marine Textiles for sponsoring the event.