Hi All
It’s been an action packed SIX weeks of National 18 sailing with a difference. Who’d have thought we’d be 18 sailing in late Nov… 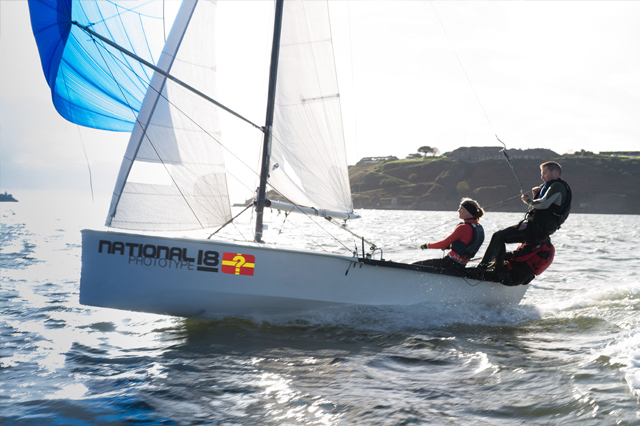 We launched the National 18 prototype just over six weeks ago. What a boat. She slid out of the truck needing only four people to lift her. Aquaholics on the other hand needed eight….!
Hitting the water that day we haven’t missed a weekend since. Highlights include

·         Fantastic exciting sailing in 0-30 kts of wind
·         Wonderfully stable boat, faster, lighter & very comfortable for all the crew
·         Safe and easy to right after capsize.
·         New smarter systems to reduce the loads and improve the experience in higher wind conditions
·         Occasional temper tantrums observed by some when asked to step out of the boat and allow others to play

So a massive success capped off with a brilliant laying up supper and entertainment on Sat night 16th. The National 18 prototype was also formally named “Odyssey” at a Champagne ceremony. Don’t worry we didn’t waste to much of the bubbly on the boat..!

Odyssey will now be packed up and moved to the UK inside the next two weeks. Our Team from UK have a really excellent itinerary over the next number of months visiting all the current active 18’s clubs in Eng/SCO and entering targeted events to put her through her paces. Look out for more from Kaan, Julian, Jeremy and the team as they kick off the programme…

Checkout the new Facebook site and YouTube channel with lots of really cool photos and video clips of her Six weeks in Cork.