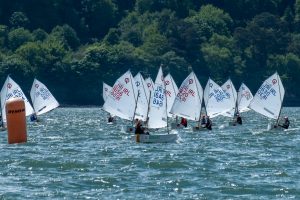 The IODAI Munster Championships were sailed out of the Royal Cork Yacht Club on the weekend of the 21st and 22nd of May. For a first regionals of the season the turnout was a spectacular 125 boats with 78 in the Main Fleet and 47 in the Regatta Fleet.
Preparations had been in train for quite some time and a close collaboration between the RCYC and IODAI resulted in a fantastic event with no problems reported across the two days.

The event opened with registration on Friday evening with Ger Venner and her team ably processing sailors in an efficient manner. The RCYC Optimist class was very grateful to it’s goody bag sponsors with lovely treats and fruit provided by Centra, event T Shirts, Cork pens and flags supplied by Cork County Council, key rings and prizes from CH Marine and event bags and water bottles by Mathews of Cork.

The wind was from the Southwest across both days and was mainly moderate. In the Main Fleet race area, a decent tide and some gusty conditions made the race track a tricky read but the pre event favourites managed the conditions well and took their expected places on the leader board.
The Regatta Fleet had taken up station close to the mouth of the river and sailed a nice triangular course. The Regatta fleet had a few retirals with some of the less experienced sailors opting to wait out some of the day in the Mothership. Everybody arrived ashore smiling which is testament to the tried and trusted systems developed over the years!
In the Main Fleet Peter Crowley’s efficient race team had managed to get in four races leaving two races for the next day.

Saturday sailing was quickly followed by a BBQ with Amy and her friendly staff serving up fantastic food. In the evening sunshine there was no better place to be of an evening… Some of the volunteers and parents may have stayed up too late but that’s the sign of a good event.

Sunday launching got underway on schedule with Beachmaster Eddie Kingston and his team working like a well-oiled machine.  Main Fleet followed by Regatta Fleet as is normal. A slightly lighter breeze had a full programme of racing concluded for both fleets and everyone was back ashore for 1430.

Prize giving followed, there having been no protests. Slight technical issues with the PA system left RCYC Optimist Class Captain Rob Bateman voicing the prize winners at the top of his voice. Opening the proceedings, he welcomed Alex Walsh of IODAI, followed by RCYC’s Rear Admiral Dinghies Maurice Collins and rounded off by Cllr. Marcia D’Alton, Chairperson from the Carrigaline Municipal District Committee of Cork County Council. 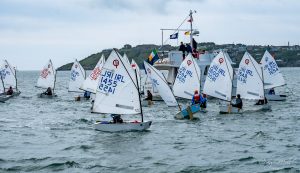