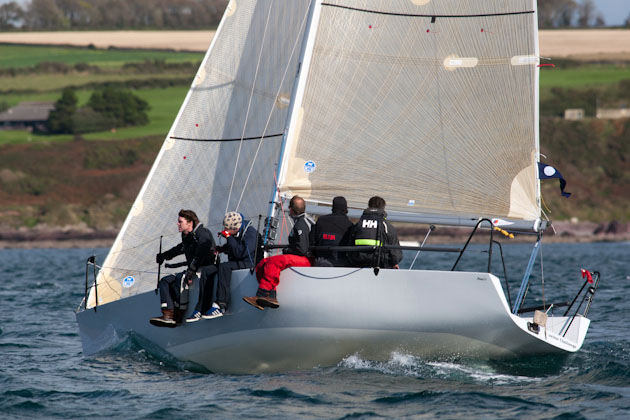 Diarmuid Foley’s “Anchor Challenge” leading IRC All In with one race to go.File Pic Robert Bateman

Hard to imagine the month of December and isn’t it wonderful for sailors to arrive at the club on a lovely sunny morning at the end of the season almost into Christmas.

The only non co-operator was the wind that started out at about ten knots and ended up as a dying breeze during the afternoon.  However, the Race Committee, as usual, had catered for all eventualities by setting a course to Cork Beg and a run back to the Cage and they got in two rounds before the wind died and bunched up the fleet and at this point the course was shortened.

It is still tight at the top of IRC All In with Diarnuid Foley’s modified quarter tonner Anchor Challenge leading Anthony O’Leary’s Antix Beag by half a point.  Incidentally, Anchor Challenge now has three wins in the five races sailed. While in ECHO All In  two boats are on 26 points apiece, Richard Lord’s Blue Peregrine and Paul Murray’s Full Pelt and Anchor Challenge is lying in third place on 32 points, the same score as David Lane’s An t’Oiléanach  and Pat Vaughan’s Aramis.

It is now all to play for in the final race next Sunday and great credit is due to the fleet that kept up the numbers for the full series.