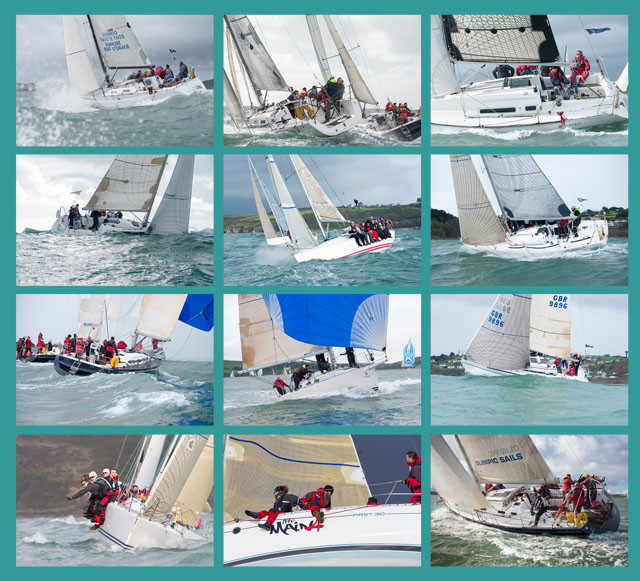 Classes One and Two on the penultimate day of the CH Marine Autumn League. Picture Robert Bateman

Today could only be described as a topsy turvy day for sailing in Cork Harbour.  One moment the rain was bucketing down, next minute there was nothing and the wind in the harbour had gone with it.  Even before the sailors got out to the course at all they had been trying to get into their sailing gear in the backs of cars, vans and any other shelter in the car park they could get in the thunderous rain.

All fleets with the exception of One and Two were sailing inside the harbour but it is to Peter Crowley and his race team on Sparetime I will go to first.  The committee boat was set up using No. 3 as the Pin End and a laid mark off Ringabella as the weather mark and there was a good breeze at this portion of the harbour.  With a 4.2m tide and a start an hour short of low water it made for a boisterous sea.  From the weather mark at Ringabella there was a run to E1 then to No. 5 and then to take No. 3 to starboard.  Unfortunately a 50 degree windshift took place which upset the best laid plans of mice and men but such is life when yacht racing and the Race Officer shortened the course after one round.   In the second race conditions were much lighter and had changed considerably and a windward/leeward course was set up but bringing the boats into the harbour to No. 7 followed by a fetch to a finish off the cage.   Fools Gold now leads IRC 1 on 12 points after eight races while in Class 2 IRC Shane Statham’s Slack Alice is leading on 14 points. 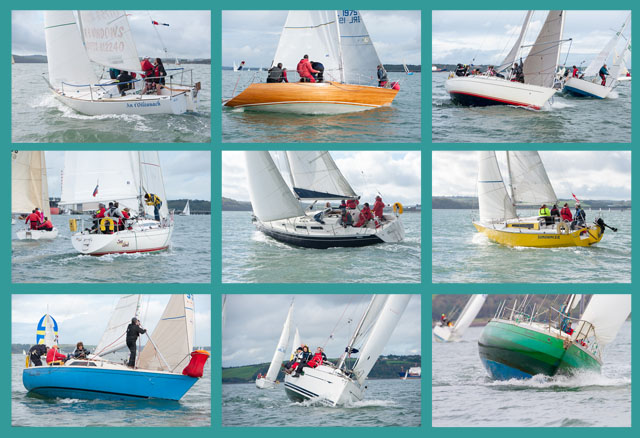 The other fleets, including the 1720 high performance  gazelles, all sailed inside the harbour with Barry Rose as race officer.   The 1720’s were a little unfortunate that the breeze in the harbour was not as plentiful as outside and this was surprising for a south westerly breeze.  However, it is unfortunate that one can’t dictate the vagaries of the wind and there was a very large swell outside which may not have proven to be very comfortable  for open boats requiring crews to go up on the foredeck  to drop headsails without any guard rails.

IN IRC 3 Kieran Collins has a slender lead of one  point from Finbarr Dorgan’s No Half Measures.  In the Sigma Class  Seahawk and Flyover had 10 points each, Seahawk counting a  2 and a 1 today and Flyover counting a 1 and a 2.  In Class 4 Sundancer is on 8 points while Shelly D is on 15 point with Thistle on 17 points but counting a 1 and a 2 today.  In whitesail IRC Michael Wallace’s Felix is on 10 points while Conor O’Donovan’s X-tension is on 15.

The final two races of the series will take place next Saturday followed by a prizegiving dinner at 7pm.