By mccannm on April 19, 2014 in Junior Sailing, Latest, Uncategorized

Club member Patrick Crosbie along with Sean Donnelly of the National Yacht Club finished in fifth overall in the highly competitive 29er fleet at the UK Youth Championships in Weymouth. They were sailing in a fleet of 64 boats, including all the top UK sailors.

The event was won by Marcus Somerville and Isaac McHardie of New Zealand, last years runners up at the 29er Worlds. UK sailors Owen Bowerman and Morgan Peach finished just one point adrift in second.

Patrick only paired up with Sean last autumn and is relatively new to the class, but has put it huge time on the water since, and it certainly paid off last week. Sean is a more seasoned campaigner having already done two ISAF youth worlds in the 29er with his brother Tadgh and who needed a new pairing this year to stay within the age limit. 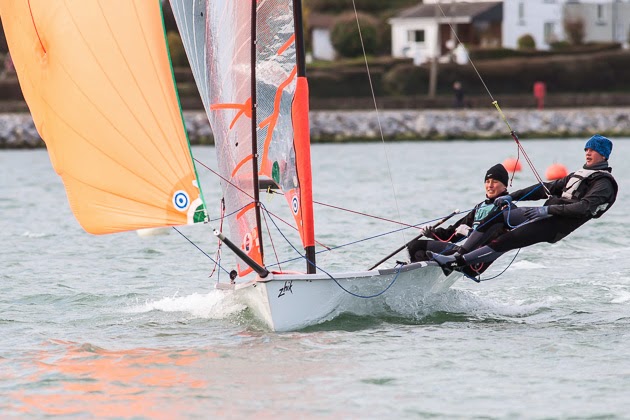 Any club members who were around during the winter cannot have failed to notice the bright orange kite in Cork Harbour as the lads came to grips with the boat every free weekend since January, and they will again be training all next week from the club.

Their ambition is to put in a good performance at the ISAF youth worlds next July in Portugal.

View all posts by mccannm →