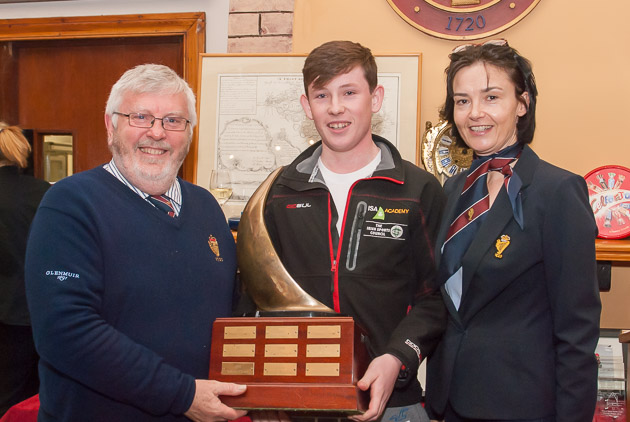 The juniors were out in force for their Laying Up supper last Friday night,with over eighty young sailors and their parents celebrating the end of another exceptional season for the club’s junior sailors. As usual,the highlight of the evening was the awarding of the much coveted Pyewacket Trophy donated by the late Roy Disney. Roy brought a lot of excitement and wonderful competition to the club when sailing three of his famous Pyewackets during various Cork Weeks and was intensely committed to the promotion of sailing for young sailors.

This year the coveted trophy was won by the duo of Harry Whitaker and Peter McCann and Admiral Pat Lyons was in attendance to present the trophy. Unfortunately, Harry was unable to attend and the trophy was accepted on behalf of the duo by Peter McCann.

The next pleasurable task for Admiral Lyons was the presentation of certificates to the Flippers and Cadet club members groups. 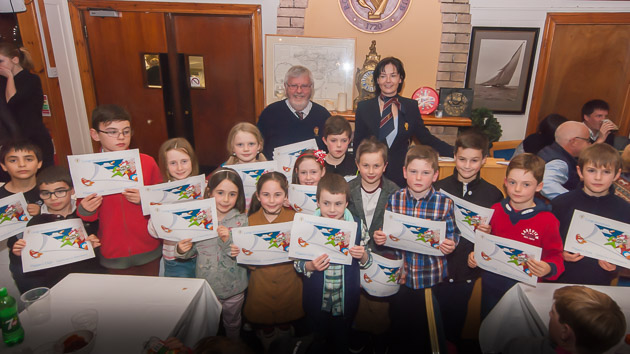 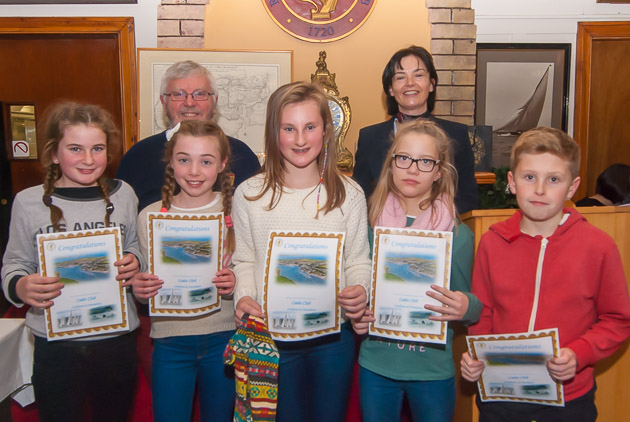 The next part of the evening was the Rear Admiral Dinghies, Celine McGrath’s tribute to Darren O’Keeffe on his stepping down from Junior Sailing administration activities and I quote her as follows:
“For the vast majority of sailors in this room, if not all of them, you will have started out one Saturday morning in April down at the dinghy centre with about 60 other youngsters and their parents all looking a bit apprehensive – for ‘Darren’s Sessions’.  Darren’s sessions have become an institution in the RCYC junior dinghies and it’s the route that almost all of us took into sailing. Darren and his family have brought more sailors into the club than probably anyone else ever has. Over many years he and Louise and the boys, Ryan, Killian and Connor, have facilitated these sessions and it’s been a family affair with the boys driving RIBs, Connor in a dinghy and Darren and Louise organizing the masses of youngsters every Saturday morning throughout April and May. Darren has now aged out of his own sessions and handed the mantle over to a new generation but I think we will continue to call them Darren’s sessions for many years to come. As a token of our respect and gratitude Darren we would like to make a small presentation to you and Louise this evening and acknowledge your massive contribution to junior dinghies at the Club.” 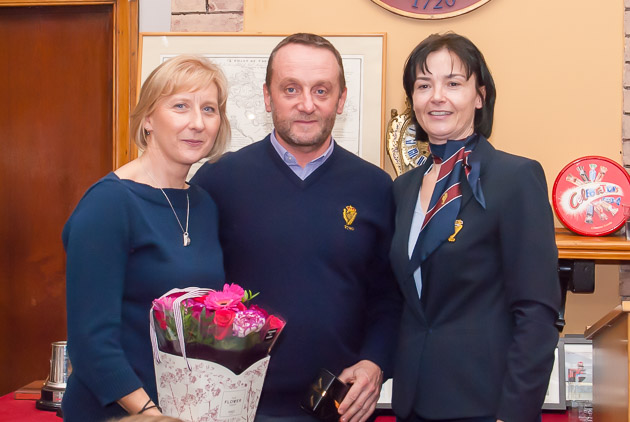 At this stage there was a short break in the proceedings and then each of the Class Captains spoke and presented prizes to their respective fleets. The Class Captains were Andrew Crosbie, Captain of the largest fleet by far in the club, the Optimists, Gail Enright, Mixed Dinghies including RS 200s. Annamarie Fegan, Topper Class Captain, Michael McCann 420 Class Captain and Paul Tingle Laser Class Captain. As this report is a general overview of the event, I have no doubt but that reports from Class Captains will follow shortly.

To complete the prize giving there was a new trophy presented which was a poignant occasion. This is a memorial trophy to the late Frank Thompson whose recent untimely passing shocked all of us. His son Richard represented the family at the prize giving. This award goes to the person or persons adjudged to have displayed the highest possible level of voluntary commitment to Junior Sailing and the first recipients of this prestigious award were Annamarie Fegan and her husband Denis Murphy. 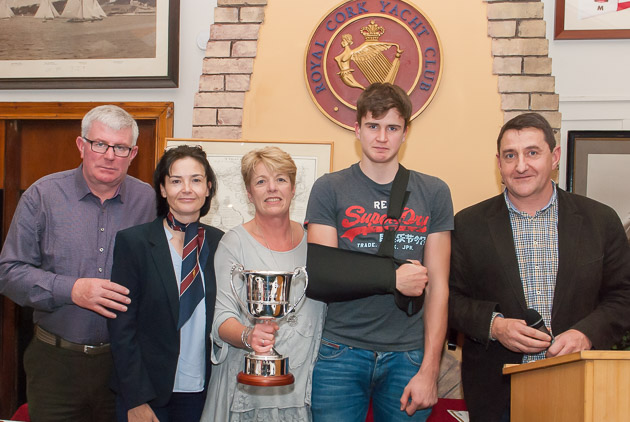 On completion of the prize giving Rear Admiral Dinghies, Celine McGrath was presented with a bouquet of flowers by Anna Keal in recognition of her dedication and efforts during the year on behalf of Junior sailing.