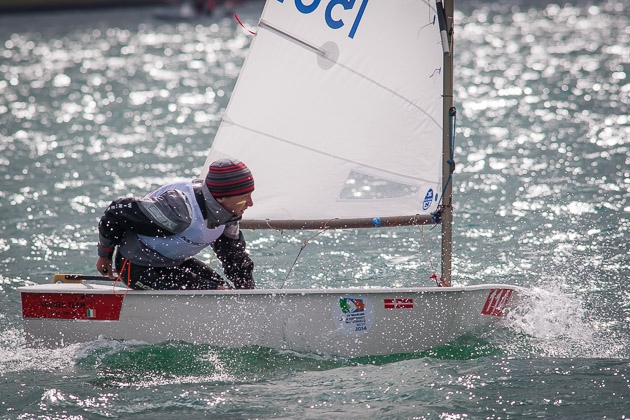 After the second day of qualifying at the Optimist World Championship, Nicolas Rolaz (SUI) has now posted a 2-4-3-5 to lead the 207-boat field. Tied for second is Mara Turin (SLO) and German Valentin Muller, while Emma Kaneti (USA) leads the North American contingent. The schedule calls for a 6 race qualifying series, after which the sailors will then be divided into gold, silver and bronze fleets. Sailors in the gold fleet will sail for the World Champion title on October 29th and 30th. Ireland’s Harry Durcan finished 54th and 53rd respectively in the 207 boat fleet in Races 3 and 4. No discard has as yet been applied

Racing commenced yesterday  in Argentina for the 2014 Optimist World Championships. Royal Cork Optimist sailor, Harry Durcan is  the only Irish competitor in the fleet of some 230 boats. He is currently the ISA All Ireland Junior Champion and earlier this year he won the Consul Cup at Lake Garda. He also sailed in Cork Week on the all conquering Mark Glimcher’s Catapult in what must have been a thrilling and very proud experience for the young sailor.

Unfortunately, Day one in Argentina did not go Harry’s way. He had an OCS and a black flag but today  is another day and hopefully he will have settled and no doubt will return to his usual form. He is lucky that his Coach in Argentina is a member of the host club and this should boost his confidence greatly. The Coach, Fernando Gwozdz, is well known in Royal Cork as he has coached in Crosshaven over a number of seasons.

Dante Citadini, from Argentina and Dimitris Papadimitriou from Greece are the provisional leaders of the Optimist World Championship, as they both won their two races. Yesterday was a fantastic day of racing with sun and 7-9 knots from the North and two races were sailed for the three fleets.

The fleet has been divided into three fleets that will change everyday according to their ranking. They will sail 6 races for the qualifying series, where the sailors will then be divided again into gold, silver and bronze fleets. Sailors in gold fleet will sail for the World Champion title.

Today two more races are scheduled but very light winds are expected according to the weather forecast.

Racing continues today October 23rd and  tomorrow 24th, with a spare day on October 27th. The Fleet will split into Gold, Silver and Bronze on October 29th for the final series and will conclude on October 30th.

Harry  is a very popular Junior Member of the Royal Cork Yacht Club  and he carries with him warmest good wishes from the Admiral, Members of the Executive, Club Members and Staff of the Club who are all willing him on in his efforts in Argentina.