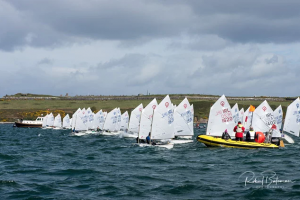 After much planning, multiple meetings, the event for the 2019 Youth Nationals was built out and ready for the sailors to arrive and enjoy. There was to be 4 days of sailing to decide who would make the various teams to represent Ireland in the Optimist Worlds & European Teams along with the 2 International Development Teams. A total of 60 Optimist sailors took part in the event. They all had their Optimist dinghy documents checked, sails measured & signed off on the evening of Wednesday 23rd in readiness to race on the following day, no easy task for sure!

11 sailors represented the RCYC in the event:

The first day started with very light winds and a little rain. The Optimist fleet where allocated the Curlane Bank which was sheltered from what little wind was to be had & the first race of the day to be abandoned due to light winds & a strong tide. However the Optimist OD Anthony O’Leary and his assistant Sally O’Leary were not to be beaten by something so trivial as no wind! They reset the course and successfully gave the Optimist sailors 3 good races.

Day two had much stronger winds, in fact there was just a small window of opportunity which Anthony O’Leary wanted to take advantage of and get in maybe 2 races before the Storm Hannah was scheduled to arrive later on in the day. The Optimists headed back out to the Curlane Bank as no other fleet where able to sail. As it turned out our OD Anthony O’Leary was able to squeeze in 3 important races much to the delight of the sailors.

Day three was unfortunately lost to Storm Hannah, which ended up as a down day for the sailors.

Day 4 arrived with very slack winds, and racing was brought forward the evening before by an hour enabling us to get in as many races as possible before the 14:00 last race start deadline. Once again lack of wind made for a long day on the water, but our OD Anthony O’Leary managed to get in 2 more races to bring the total amount of completed races to 8. The sun shone all afternoon, and was a welcome addition to the day, allowing for all the sailors to arrive back in glorious sunshine and enjoy the afternoon in readiness for the prize giving.

It turned out to be a very successful Youth Nationals for the RCYC, with all 11 sailors showing great courage and displaying great skills during a trying event, which had Storm Hannah rattling through the courses.

Two of our sailors qualified for the Worlds team; James Dwyer Matthews & Ben O’Shaughnessy, another two for the Europeans; Justin Lucas & Alana Twomey and a further 2 more for the International Development Teams Jamie Venner & Emmet Lucas!

Justin Lucas received a special award for Fair Sportsmanship after going to the assistance of another competitor whom was injured during the race.  This sportsmanship action lost him his top position for that particular race.  It’s a good reminder to all competitors that’s its always best to be a good sportsperson rather that try and win at all costs.

Well done & congratulations to all of our sailors!

Here is the complete list of newly qualified Team sailors:

These events take plenty of organizing, preparation and actual day-to-day work to make them run smoothly, and this event was no different. Many thanks to all the volunteers whom assisted us in this event. As usual the RCYC members rallied around to volunteer their time & energy to make this a hugely successful event, thanks once again.

So ends the 2019 Youth Nationals Optimist Trials on a very successful high for all at the RCYC, Irish Sailing & IODAI.